Although most of these figures have appeared in previous posts it's always nice to put all of the figures of a particular army together. In this case, just one unit away from completing this army... which would mean a couple of units being 'bumped' into other Divisions.

The army is formed from 4 Divisions - Amun, Pre, Sutekh and Ptah. Each Division apart from Ptah consists of a scout cavalry force, a chariot unit, 2 close order spear/blade units, 1  close order archery unit and a light infantry unit. Roughly 84 infantry, 4 chariots and 6 cavalry. Ptah is the 'foreign' Division, Nubian/Kushite. More archers than spears and commanded by a Kushite commander. The Pharaoh has a separate 'Guard' chariot unit.

These photos show the army with Amun and Pre in front, Sutekh and Ptah behind while the Pharaoh and his squadron lead from the front.

This shows the ranks a bit better -  Pharaoh in front, then cavalry/chariots, then infantry.

The left flank, Pre backed by Ptah. Pre has it's own 'general', as does Ptah. The Pharaoh would normally be with Amun so perhaps I should sort a general for Sutekh...

There's still a couple of units to sort - a light infantry archer unit, a few 4 horse chariots, more Hordes and some heavy infantry spears. However, this is basically the completed thing.

Most of the units have already been shown but this is the first time I've managed to put them together as an army. They cover a 4' frontage here, so I don't think I'll ever be able to do a 'Grand Review' covering these, my Garrison Assyrians and the assorted ones that head this blog.

These two show the whole army lined up 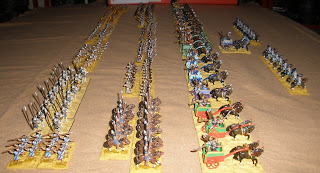 The right flank going into the centre. The 2 horse chariots are ones I've done. One thing about the chariot force is that crews are a mix of Garrison and 'S' Range.  Some also have Garrison wheels. The middle 2 horse chariot is my 'Early' Assyrian general.

The heavy chariots are in the centre. I used the 'S' Range cataphract horse to pull them - still got another 4 to do. I've split the Scythian light horse unit into 2 for these photos - I have got another unit of these but they have been allocated to the Persian army.

Chariots on the left flank are a mixed bunch. Starting from left to right, the first 3 are ones I did. In the middle are the 3 that came with the army. These have not been modified and I tried to paint the rest of the 2 horse chariots in the same style. The extreme left flank are ones that came with the army but were not painted by Harry - see here.

Hopefully I'll be able to sort out and photograph more 'complete' armies over the next few months.
Posted by Rob Young at 17:06 6 comments:

Getting 4 new moulds made and the figures are now with 'The Mould Maker' - should be ready in a couple of weeks.

One is the S&S Vanha mould - apart from the archers, there are 2 variants of swordsmen (one with sword raised to slash down, one with sword reversed so it looks like it's being waved about in the air) and a figure throwing a javelin. Should have had new photos done to include the javelinman.

The other 3 are (of course) more 20mm Ancients - 2 are just some horses and Greek hoplites, the other is my series of Persian/Mede robed conversions, including:

The Greek hoplite mould does include another conversion - the medium cavaly figure rebased as a hoplite. It also has a singlr Roman figure - the marching legionary that I've been intending to sort for years. It's a repaired master so will need another mould for me to produce reasonable numbers - so I'm still going to need more moulds in the future.

In the days before I bought Garrison the previous owner said there was no way in which any new Garrison moulds would ever be made. I think my total of new moulds is about 120...
Posted by Rob Young at 14:14 2 comments:

During my recent spell of casting I had (continue to have) serious problems casting the Vanha archer. It became increasingly obvious that it wasn't viable any more. So a new mould is in order, but they're expensive and I needed morte than just an archer to justify the cost...

When I did Aquiland and Nemidian moulds I sorted an officer for them. OK, new project, Vanha officer. Basically cut the spear off a Vanha spearman and replace it with a suitable sword. I now have masters for Vanha swordsmen... 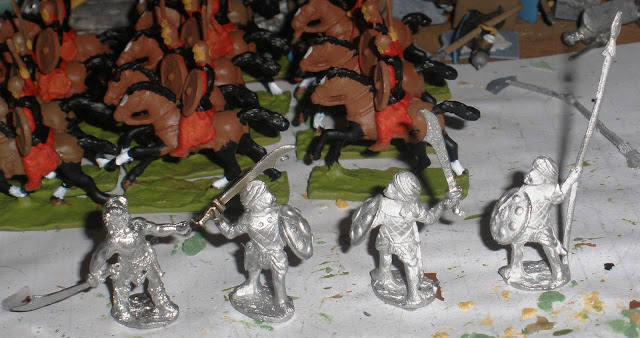 Not sure how well they'll cast though - the sword is very thin and doesn't do all that well when attached to other figures. I can but hope.
Posted by Rob Young at 23:25 8 comments: