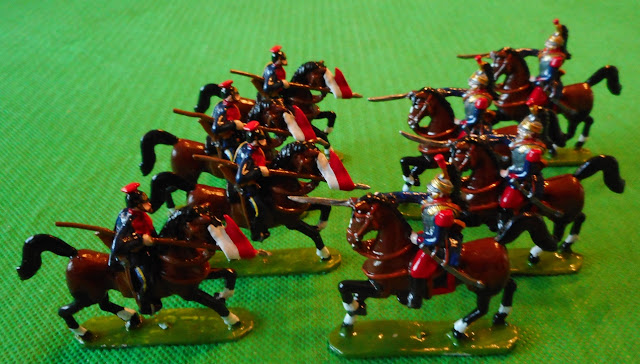 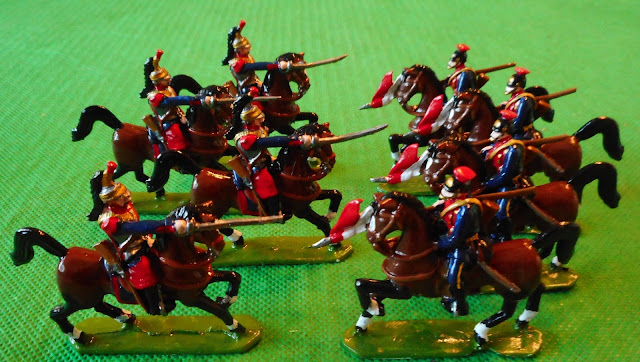 The Lancers are serving as generic British Lancers - they're actually Prussian Uhlans but the only really noticeable difference is the lack of a plume. Closest Regiment would probably be the 9th.

The French Currasiers are likewise quite generic - fact is, don't know enough about them to be specific. Saddlecloth may be wrong for rank and file - pictures suggest plain for these, blue edged with red for officers - prefer the blue/red combo so...

And this is a comparison between Spencer Sith and Irregular cavalry figures. Important thing being they are basically compatible.

It's one thing collecting and painting loads of shiny 42mm toys, but that's only part of it. Battles and generally playing with the things means you need buildings, hedges and trees on the table as well.

Happily, I've got Newhaven. OK, Newhaven is 28mm rather than 42mm, but then lots of people have buildings that are to a smaller scale than the figures, plus one house = one village... Not relevant! This is basically a 1:1 toys scenario! The question is: what do they look like next to each other.

So I've had a couple of quick sessions trying things out.

This is my Lledo brewery. Very much something to be defended from those Foreign types. 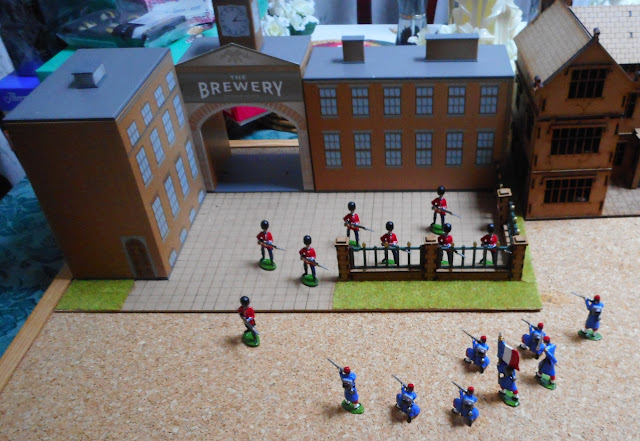 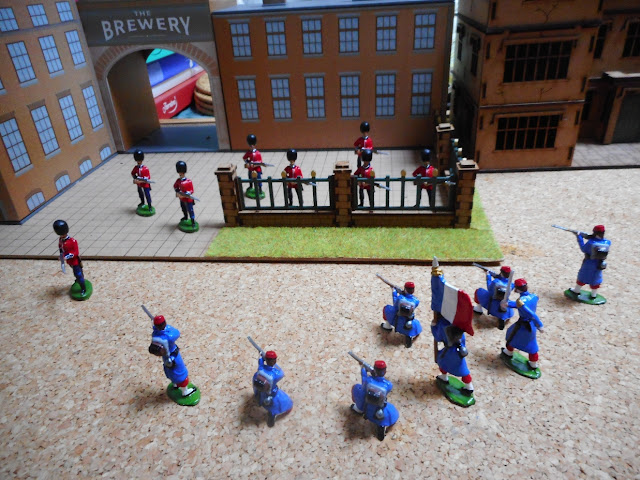 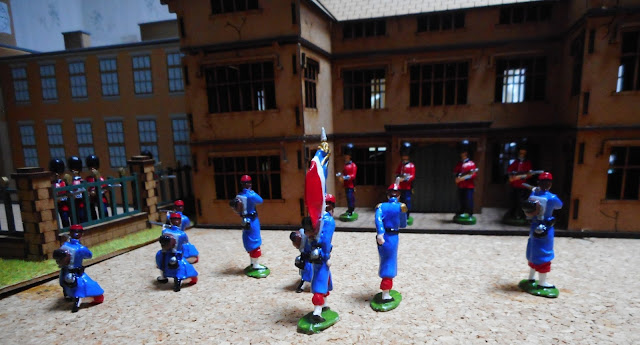 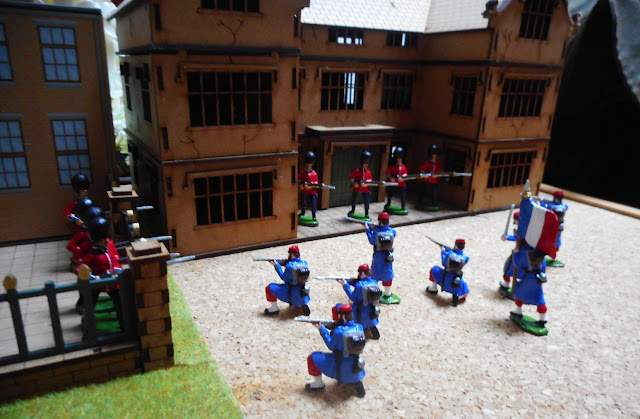 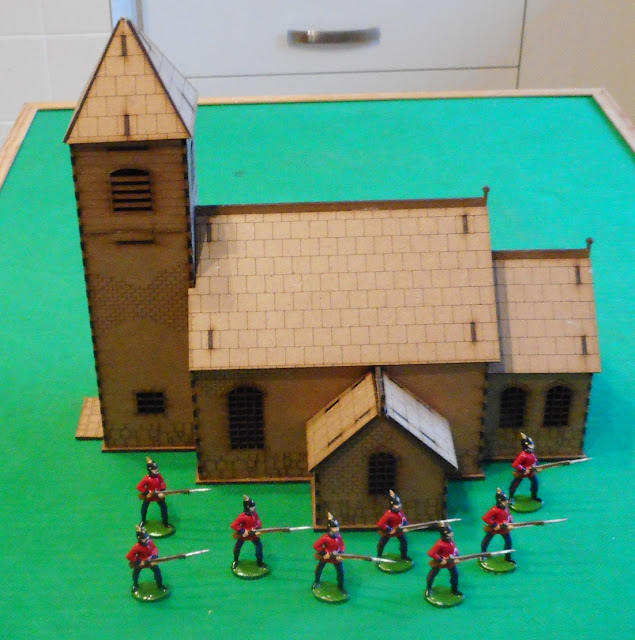 However... 1897 is very  much a British affair - most of Newhaven is obviously American. Don't think the TTCombat  police station is appropriate somehow. 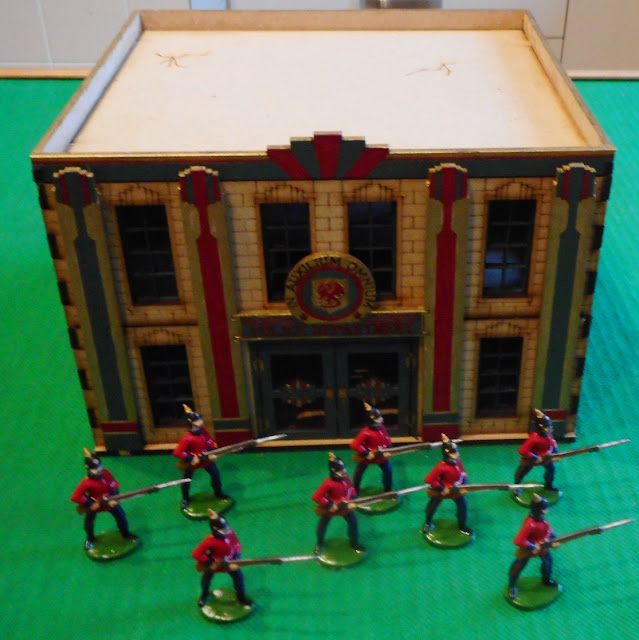 So, conclusion - 28mm buildings go very well with 42mm buildings. However, it does mean having to buy and build a load of British houses if I'm going to represent the sort of High Street I grew up in (and which would have been easily recognised in 1897.)

Thought I'd posted these in the past but can't find them - a comment re  Rose 20mm cavalry came up on the Old Metal Detector blog which made me look for them. 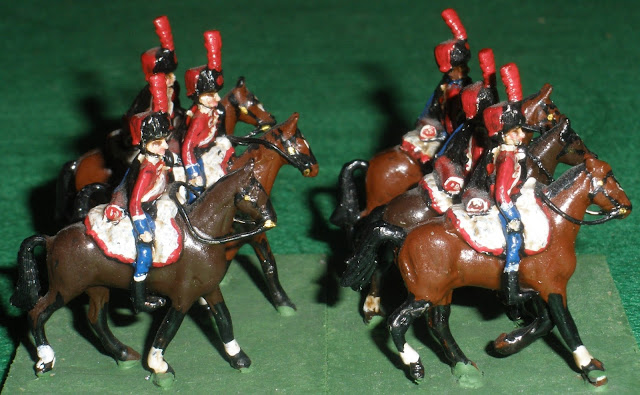 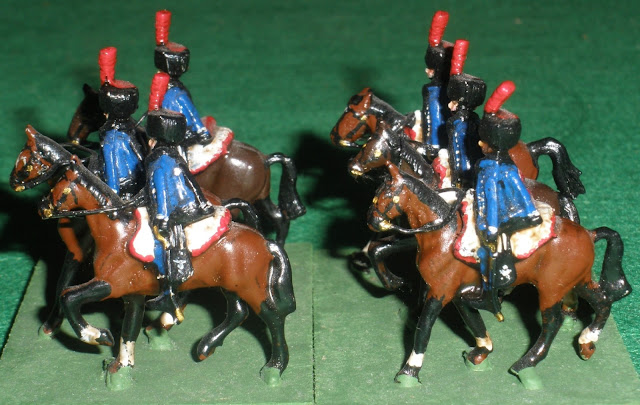 1897 The first of the invaders

Very much toy soldier for lots of reasons. For a start, what colour blue? Every picture looks different. Finally settled on Vallejo Model Colour dark blue - 70.930.

Next, unit size. On Regimental organisation, 151st Line Infantry Regiment in 1914 site suggests each Brigade included 2 Regiments. The Renegade Miniatures site and French Regiments of Infantry amplified this by saying each Regiment had 3 Battalions. So, even though 1914, quite happy to go with this.  How many companies is another issue. Renegade Miniatures suggest 5 companies - 'and whilst a battalion officially consisted of 1,000 men (approx. 200 men making a company),' - but 151st suggests 4 companies of 250 men.

So, on balance it seems reasonable to stick with 4 men per Battalion, therefore 12 men per Regiment - except the figures I got from Irregular are in 8s... so I'm going to have them leave one Battalion per Regiment at home!

One thing I'm not sure about is the flag - do I leave them plain or try for some fancy gold letters? Thinking about that one! 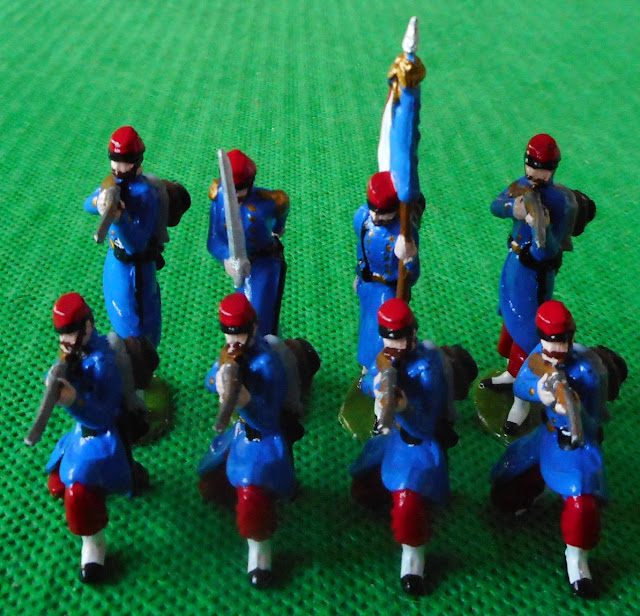 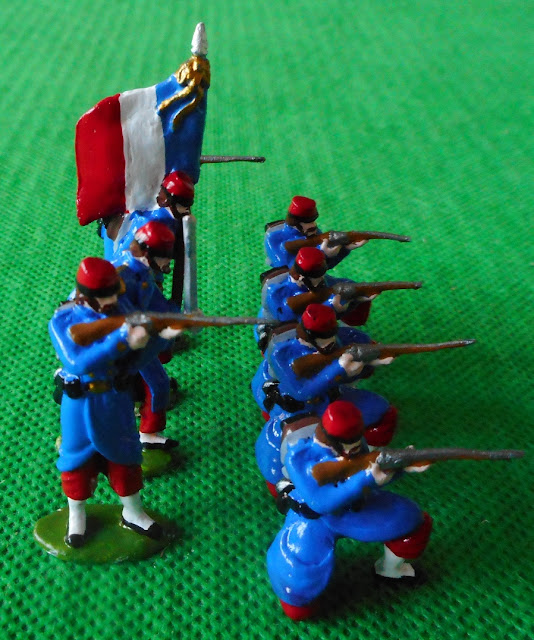 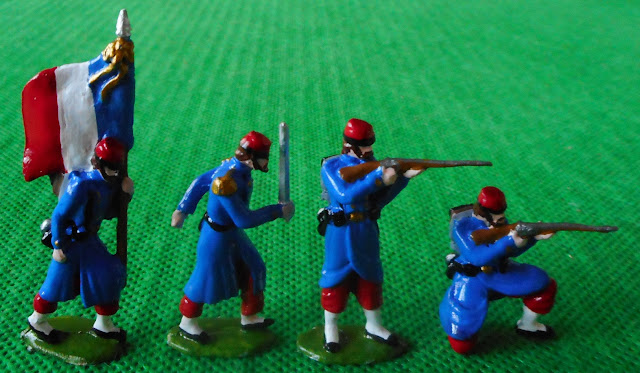 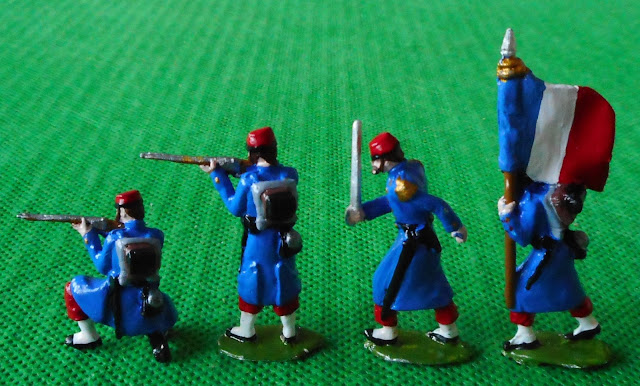 Back to basics... this unit was already half finished but I stopped when I started painting the Scots Grays.

So, I now have four Regiments of infantry completed - one Grenadiers, two Line and one Highland. Enough for a whole Brigade!

Sudden splurge of painting and glossing!

This lot were a bit more complicated. They are nominally simplified Black Watch (ish). 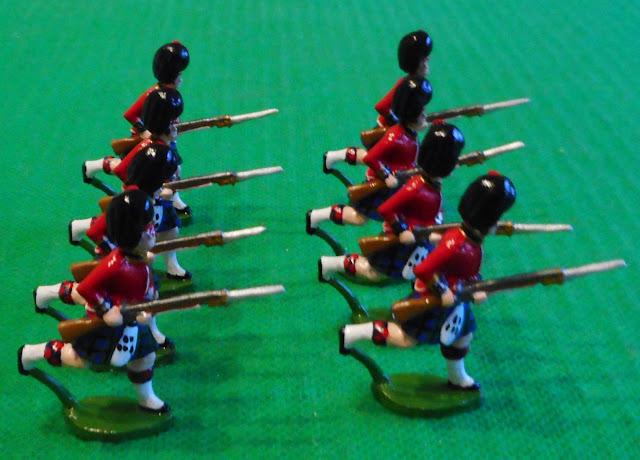 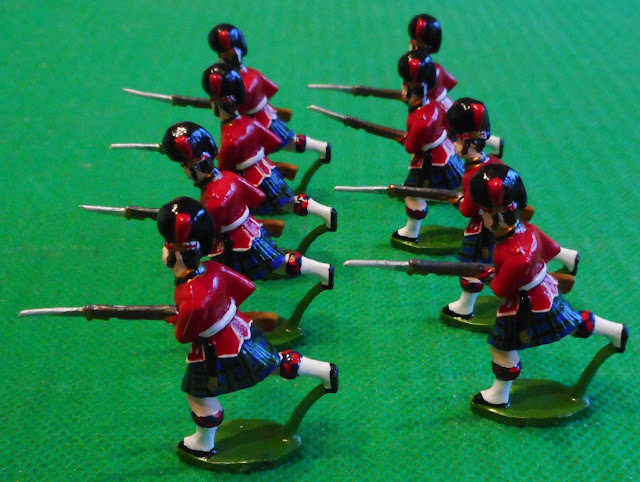 This picture is the one one that said 'whoops, missed a bit.' 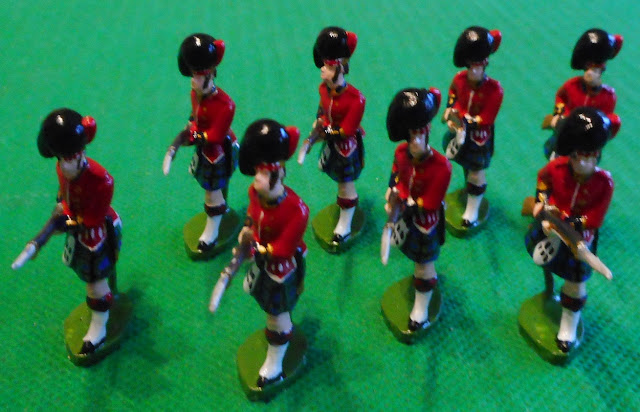 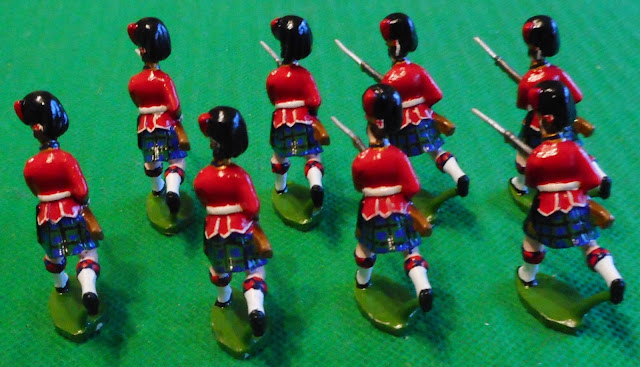 Bought off ebay and happily able to fit right in with the army with very little alteration!

Slightly different pose to the ones they're joining - Minifigs did tend to like changing things around in those days.

For obvious reasons I'm not doing as much painting and posting at the moment - other things occupying my time. So, looked for something quick and easy and settled on painting a couple of the guns.

The British at the time used the Maxim. I took an Irregular tripod mounted machine gun, chopped off  the tripod and fixed it on a Gatling carriage. At this point I remind myself 'toy' - wheels too small, no gun shield and no seat for the gunner on the trail. Long term though - I'll be looking at options. 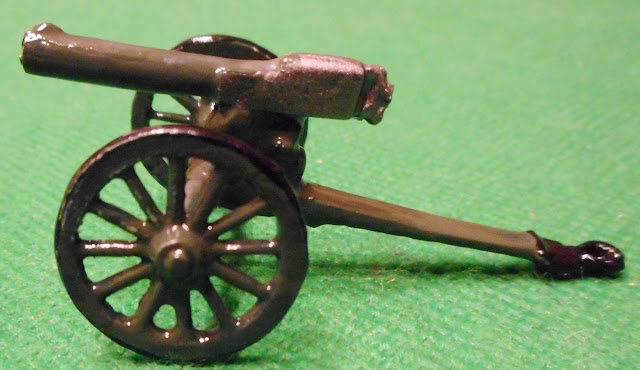 The 40 pounder mentioned in the book is the 4.7" RML gun that remained in use until 1902. It's a Spencer Smith model, not particularily accurate but toy... 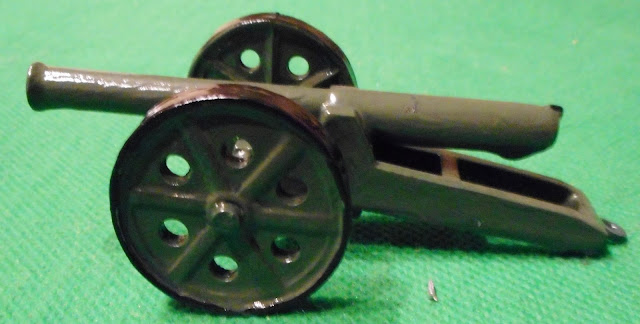 Colour scheme for both guns is just a plain green. I think that the Maxim should have more of a natural wood finish, perhaps the 4.7" should be grey - could rethink colour schemes in the future.

OK, to a certain extent back to normal, Scots Greys finished. Really, if I had to have one unit of cavalry then it would have to be Scots Greys with very toy soldier like horses. Slightly greyish with white dots on the flanks. Perhaps mane and tail should have been grey rather than white, just preferred white. 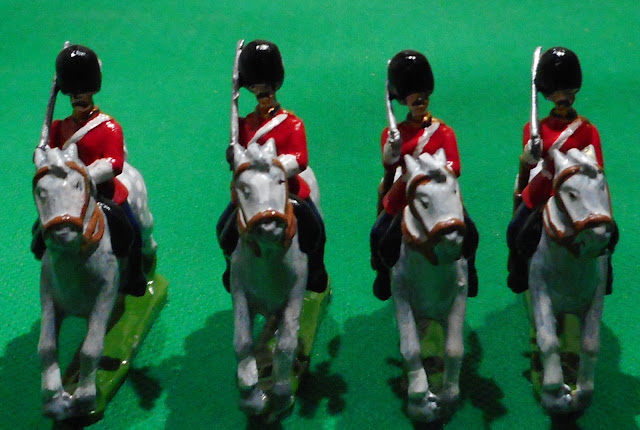 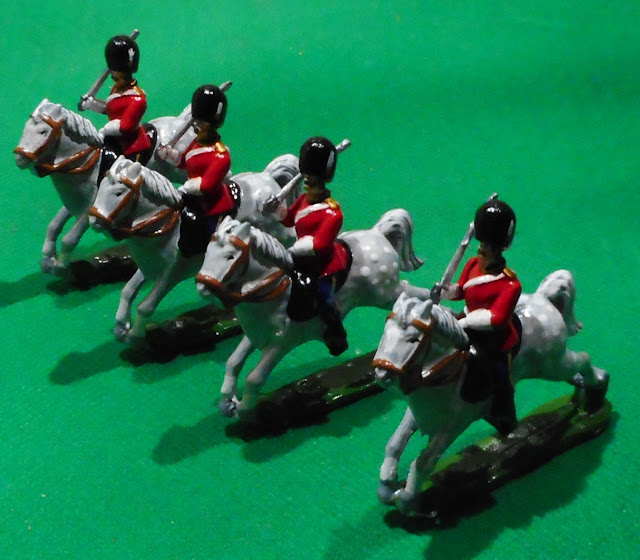 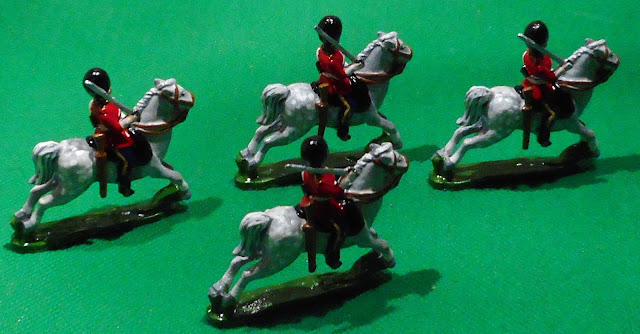