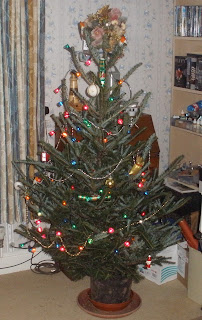 Lots of troops gone to winter quarters but some of the more recent recruits are still hanging around. So it seemed a good opportunity to have a Review on the dining room table before it got covered with more edible offerings. 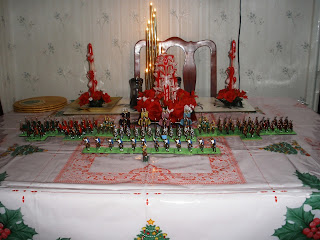 Elephants flanked by Indian 4 horse chariots - Successor chariots were off on holiday somewhere.... then  the cataphacts, light cavalry in front of them, then general inspecting everyone.

Some of the Alexandrian heavies.

Unbased general lying around to take the Salute... Garrison general, cast by me, painted by Harry. 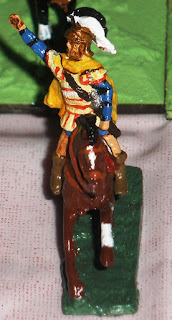 Another Minifigs troop type from my early days - these had originally been replaced by a unit of Hinchliffe figures. 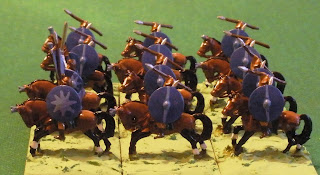 Time was I had a load of these. Gradually replaced by Lamming then the later Minifigs offerings this figure was consigned to history. Well, I've got some of the old boys now. Not enough, and I've painted them in brighter armour than I used to, but it's a start. (Need at least 2 more units) 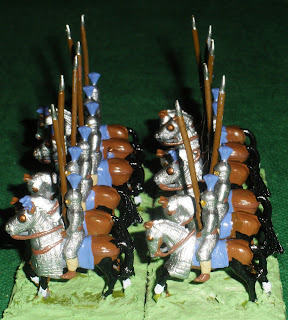 A few weeks ago I posted my current Alexandrian army Review.

Since then I've acquired some painted Companions with unpainted horses, so I've painted the horses, added an officer figure and based them. This means I now have 3 units of Minifigs Macedonian Companion cavalry:

These are the new guys. Must start taking more time over the lighting...

Alexander and his crowd. All these have just been rebased, nothing else. 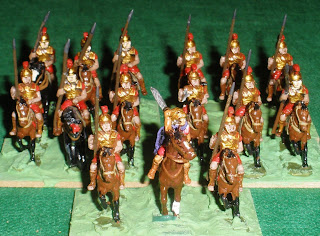 Thought I had rebased these but haven't - job for the New Year!

In retrospect, couple of things to do - find an officer the third unit and convert one Companion in each unit to a standard bearer as I did with the shielded heavies.
Posted by Rob Young at 16:12 6 comments:

I've now painted and based the second unit of shielded javelin cavalry. Because I want to be able to use them for both Seleucid and Roman armies I've just given them plain shields - red shields can act as Roman cavalry, green shields as an Allied Italian contingent. Only reason for green shields is that I painted these at the same time as the Indian chariots - no sense in changing paints all the time. Although these two units are enough for my needs there is still my 'original' unit waiting in the wings of course.

I've added standard bearers to both units. Difficult conversion - crossbar cut from a spear and paper flag. Again, I've left them in plain colours. If I did do a third unit I would probably give them blue shields.

Both units consist of a command element and four three figure bases - the command element being present to act as general or subordinate general, the other four elements make up my 'standard' 12 figure unit (standard non-Garrison I should add - most of my Garrison cavalry units are 24 figures.)

Remedial work plus basing completed. Still a few issues but they meet the criteria for a 'minor' priority  army as regards quality anyway.

Only got enough horses at the moment for two of them - have got enough to make the last one a 2 horse chariot but I can wait - I know I've got more Indian cavalry horses somewhere.. A six man crew is rather a lot to fit in to the chariot cab itself so I've spread the crew around a bit. Must sort out better lighting for photos sometime. 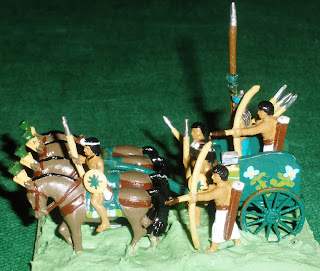 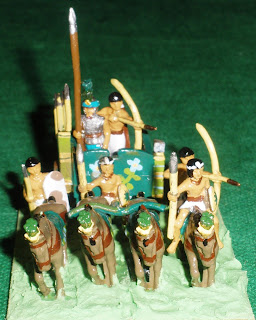 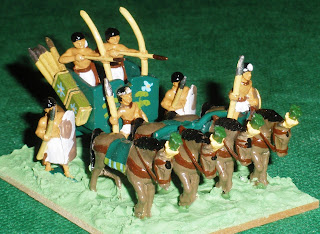 Always check the can...

Last spray of varnish on some Indian chariots, put can down, turned models, picked can up, started spraying.... wrong can... 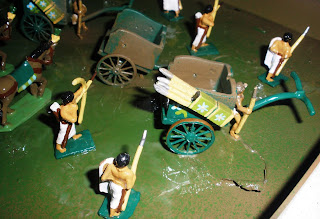 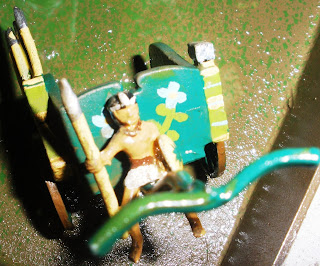 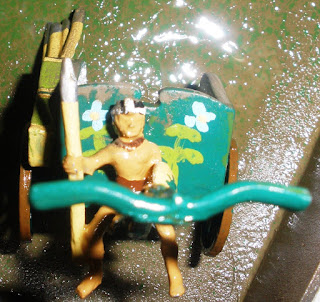 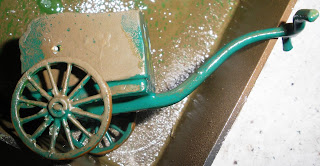 As I think I've mentioned a few times before my various Macedonian armies were (still are) a mess. This is really, really true of the cavalry... Started with shieldless javelin cavalry, added drawing pin shields, then replaced unit with actual shielded, then went to kontos armed... and that's just my Companion cavalry.

So now I'm doing a resort.


The last version of my Successor cavalry have already made an appearance on this blog. However, the heavies are kontos armed, usually Successor heavies are javelin/shield. They can be seen next to a unit of Lamming cataphracts. 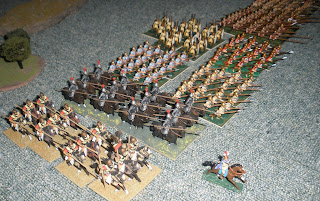 So, time to rebuild the javelin/shield force. The first picture shows the 'original' unit - should be 15 strong, some AWOL - followed by a unit I've just painted. I've enough figures to do another unit but still scraping together the 'right' horses.

The 'new' unit have been given red uniforms and plain red shields so they can double as Romans.

These are early PB figures - shorter, thicker spear/javelin, cast on horse furniture (means I should have used 'S' Range horses instead of PB). 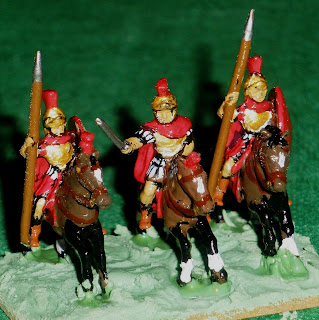 The longer, thinner spears on my earlier unit shows that they were a slightly later production figure. Not sure what to do with these - try and find the rest I suppose! 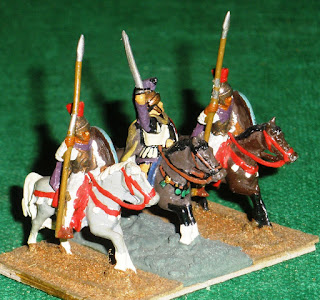 So at least one other unit still to come, plus some light cavalry - again, the light cavalry are in a bit of a mess. I'm painting some up now so they should be ready in a few days.

At the moment I'm actively working on 3 Minifigs armies - Egyptian, Alexandrian and Seleucid. Both the Egyptian and Seleucid armies have quite a few figures either still in Dettol or being painted, but most of the unfinished Alexandrian's only need rebasing.

Being a bit on the impatient side I thought it would be nice to get them all together for a Review...

I set them out in 4 main lines. The first line consists of 'distance' psiloi - archers, slingers and staff slingers. The second line are javelin armed psiloi. Next, assorted Companion cavary - Alexander himself is part of the extreme right flank unit. Finally, the main battle line - Hypaspist units, then phalangites, then mercenary peltasts, finally on the extreme left were all my Thracians. 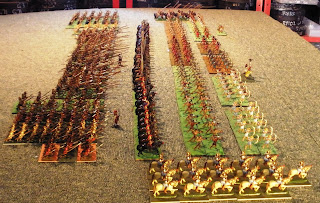 On the flanks are the light cavalry... 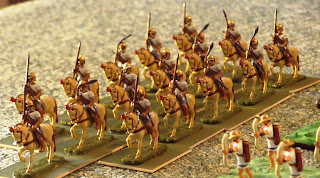 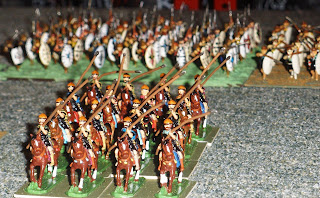 Most of my close ups of the bulk army didn't come out very well - army's still set up, might try again later.

The majority of these are ex-Harry Pearson collection, some are from my original 1970's army.
Posted by Rob Young at 12:13 8 comments:

The standard wargames LTS,J,Sh peltast of the 70s...

This lot started life as 8  psiloi back in the 70's. With a few exceptions, most of my Hellenistic troops wore red tunics.

As these ones have pelta rather than thureos, these will find themselves fighting for Alexander.

Back in the 70's every Macedonian army had Thracians. These Thracians all had fox skin caps, tartan cloaks, black tunics, white shields and carried a sickle-like weapon called a rhomphaia.

So, naturally, I had a Thracian unit wearing fox skin caps, tartan cloaks...

At some stage I picked a unit that was obviously confused - they had blue cloaks. Probably thought they were Galations in disguise or something. Still had white shields, as did another unit I acquired more recently. Finally, I got some in the armies I bought from Harry that had white shields with colourful designs painted on them... much nicer.

So I left 'my' unit alone, painted up the shields on the other two to blend in with Harry's, then kept my unit separate while the other three just sort of mixed.

As they stand, the Thracians  naturally make four 6 element units.

These figures are formed from three separate sources.

However, they fit quite well together - main obvious difference is that the 'original' figures with fancy shields have a faint yellowish tinge due to the varnish aging. The figures with blue cloaks have been thoroughly spread out so that they aren't so obvious.

Close up of some of the shield patterns.

This is a view of the back of 'my' unit. Let's face it, the front isn't all that interesting - plain white shields and the ravishes of time mean a couple of figures have lost their rhomphaia and have been reduced to shaking their fists at the enemy. On the other hand, they have colourful cloaks.