I've now got figures from 3 different ranges so it seems to be a good time to do a size comparison. As every wargamer knows, different manufacturers often have completely different ideas on what constitutes any particular scale, so there is always the chance of a '42mm' figure being anything from 40mm up to 45mm... or worse. On ebay I've seen 20mm figures described as 28mm on a regular basis!

So, Zinnfigur on the left, Irregular in the middle' Spencer Smith on the right. One thing I hadn't thought of when I took the photos is that I'm still only half way through the basing process! The result is that here the Irregular figure gives the impression of being bigger in comparison to the others than is the case. 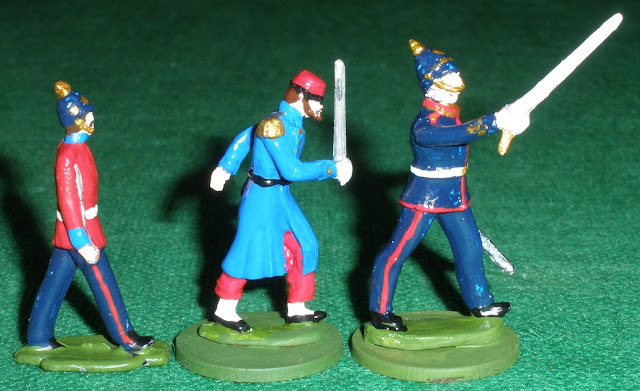 Here, Zinnfigur in the middle. There is a definite size gradation - biggest Spencer Smith, smallest Zinnfigur. However, to me they are within the 'compatible' range. 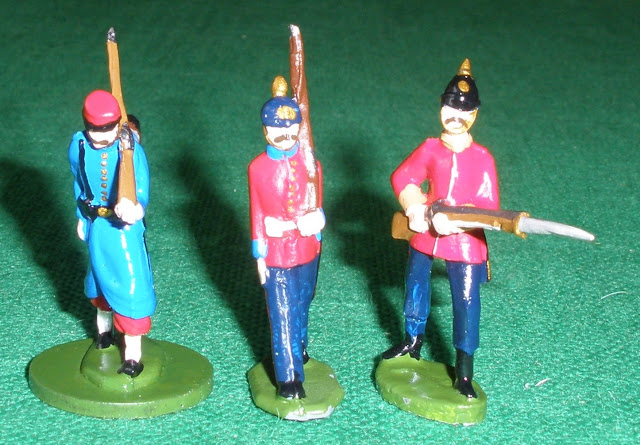 So, no issues mixing and matching these really - though Zinnfigur and Spencer Smith together are close to pushing it!

My original hope was to simply field the figures as they came. However, they had this tendency to fall over all the time...

So practicality won out and I've started to put everything on bases. The infantry are on 25mm round bases, cavalry on 30x80mm rectangular ones.

Can't really think of anything else to say about it!

Got the first few of the Ebay figures stripped and painted. Didn't come out too bad really - rifles poor and the overall castings are not up to professional spincast standards but they'll do.

Found in the attic

Over the years I must have had thousands of 1/76, 1/72 and 20mm tanks and things. In time, they have tended to be packed away in various places and more or less forgotten. So, there I was looking in the attic when I came across a box...

I thought that this lot are all Frontline models. In fact, I'm part way through painting a recent order from them now. However, Frontline don't have any KV85s in their catalogue so I must be at least partially mistaken.

This one is an oddity.  I used to have a number of JS2s that were converted from Airfix Stalin 3s with balsa turrets. Looks like in later years I found one of the turrets and simply stuck it on a KV turret - don't remember doing that!

Airfix Shermans I used to have in vast quantities - looks like a few survived. It is possibly (but perhaps unlikely) that some of these are 50 years old.

Airfix also produced 'toy' versions - had a few of these but not many.

They're quite easy to identify.

I'm sure that the attic will produce more MIA vehicles in future - sometime over the summer I might start sorting all all my WW2 stuff!

The same trip to Norwich that netted those 6mm trees also netted this lot!

Well, most of them anyway.

Looks expensive but they were £4.99 each and 3 for 2! So at about £3.30 each, a lot cheaper than anyone else's 1/72nd figures. I've compared them with other manufacturers and they are virtually identical size wise.

Already had one Tiger from a previous visit so only bought 5(?)

The Ferdinands are from the Italian campaign - they have machine guns. It also said that on the display box.

Already had a couple of Somuas so topped this up with a third.

There's no manufacturer's name name on the box, but the display case does tell you the actual model depicted. Some on EBay are described as being by Deagostini, others as Eaglemoss. Or they could be ixo / antyla!

The down side of these cases is that the vehicles are attached using a strange triangular tamper proof thread. In the past these have been a pain to undo - but I manged to find a set of screwdrivers that included one head that would undo them!

So result is a lot of good, detailed vehicles that will need repainting. Not sure when I'll get round to that...

Further thoughts... might use those spare display cases at some time as well...

Think they are probaby Irregular, but can't find them in the Irregular catalogue. They cost less than a pound each and are now in the process of being stripped. Seem to have been a reasonable paiunt job at one time. 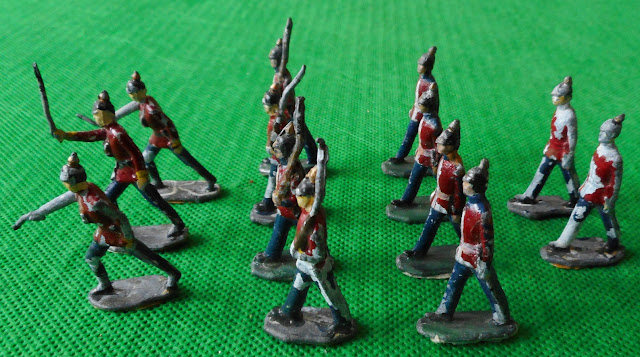 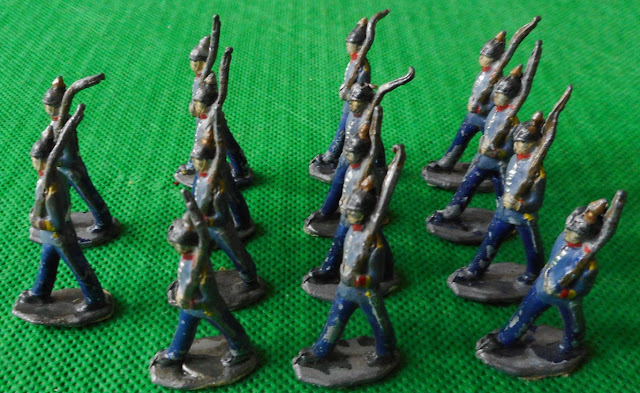 Getting there. The beauty of these is how quick it is to build a city! I won't pretend that I'm being careful about these - basically, I'm just throwing them together.

Trees are a load I picked up from Langley's in Norwich, vehicles are just undercoated Garrison - some day might finish them... 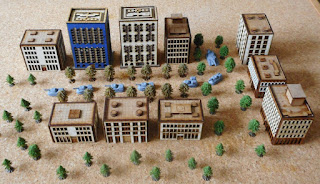 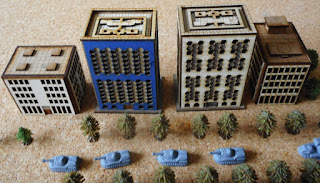 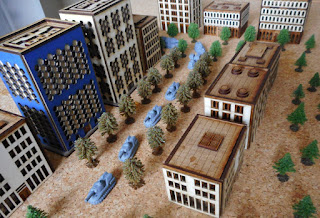 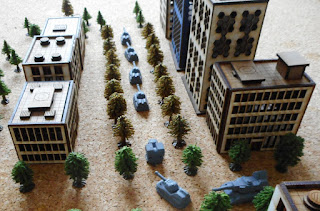