So, with only a couple of units to go before I complete the Assyrians I'm suddenly distracted by the Carthaginians. May not make sense but sums me up perfectly!

The Carthaginians are an army I've never owned before, so acquiring Harry's was a completely novel idea.The intention is to limit my own input on these as much as possible - they're nicely painted to start with. There are also a few other figures I've picked up to incorporate into the army, so still quite a bit of work to do.

Usually I've tended to wait until I've finished units/armies before posting but recently new posts have started to become a rarity so I thought I'd put in an 'interim' report.

I've started with the cavalry. The Celtic component have their army including cavalry so I'll leave them for now. Other components are loosely Carthaginian, Spanish and Numidian.

Thought I'd include separate pictures of the generals before they got lost inside their elements. The Numidian prince is one of  Harry's conversions

The unit of Carthaginian noble cavalry - some spears have lost a bit of paint but I'm leaving well alone. 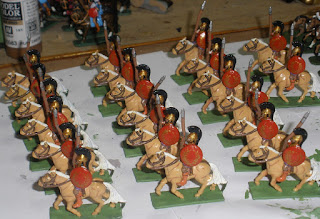 The Liby-Phoenicean component were a separate internet purchase. Although I originally intended to do very little with them, eventually I repainted everything apart from the horses and helmet crests. 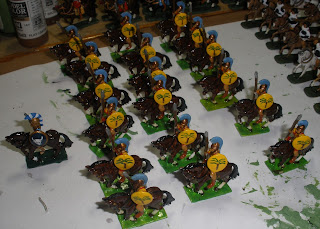 I can't remember where I got the figure that will officer this unit! could be ex-Harry, could be 'other internet purchase' He's actually Greek 'S' Range, and I like the figure as is so I'm leaving him - who says officers have to have the same shield or crest pattern as the rest? 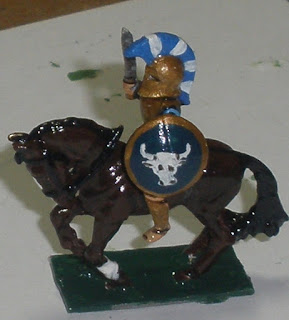 The Spanish medium cavalry have simply been rebased, no other work needed. 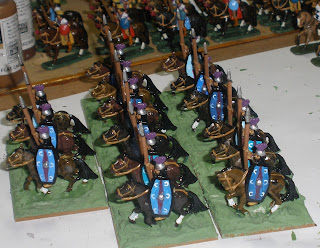 The Spanish and Numidian light cavalry all had thin wire javelins half of which dropped off. I prefer something more substantial anyway so they've all been redone. Might leave a clumsy join, but again going for minimum needed on these. 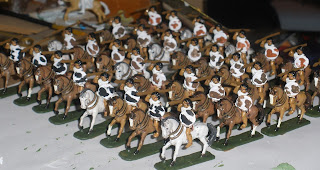 So that will be the cavalry component once finished. Or should that be if finished?

Although most of my figures are Ancients I do sometimes have a play in other areas, mainly to see how they look. Napoleonics are quite colourful so one day I decided to paint up half a dozen Rose 20mm hussars. I should point out I undercoated a few other Rose figures; the hussars actually got finished.

They are quite pretty. 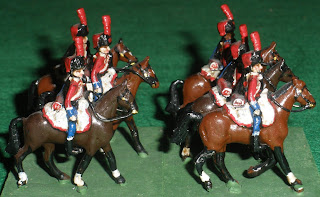 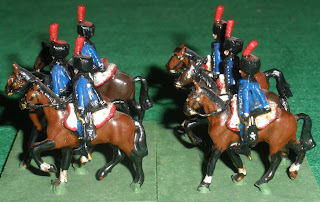 I'm pretty certain the paint job is loosely based on the illustration in Funcken of a Hussar belonging to the 1813 French 12th Hussars. 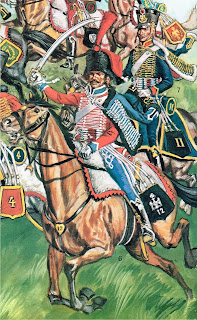 Some early attempts at Libyan conversions

Together with the Egyptians, I also started worked on a full range of Libyans. These I admit to liking and regret that they never got the pro treatment.

I once came across a model shop selling off cheap Airfix Ancient Brits and Romans. As I recall I bought about 20 boxes of each. Naturally I've managed to build up quite a few chariot squadrons with these. The Libyan chariot is based on the Ancient Brit chariot, the wheels (I think) are wagon train? Possibly British Waterloo artillery? Alternate spokes have been removed. For a lot of my later chariots I used the wheels from cheap cannon pencil sharpeners. 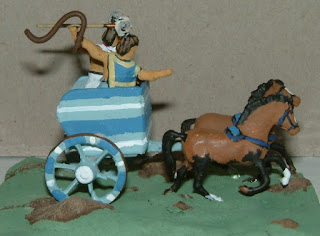 The basis of these figures is the Nubian Unarmoured spearmen. Again, they suffer from several stages of separation from the original masters - the face suffers the most, appearing as just a blob.

The feathered headdresses were fun. One of them - can't remember which one - was a pure fluke. The mould had an air vent on the head - when the figure first came out the vented piece was a perfectly good set of feathers. So they stayed in.

Apart from the feathered headdresses, the main modelling items were the cloaks. Not fantastic, but they did the job. 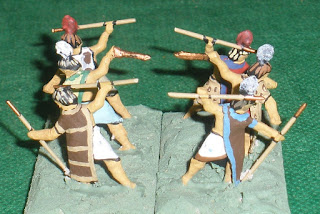 The idea was to have 3 types of figure - archer, swordsman and javelinmen. 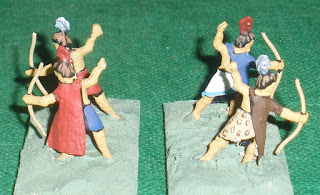 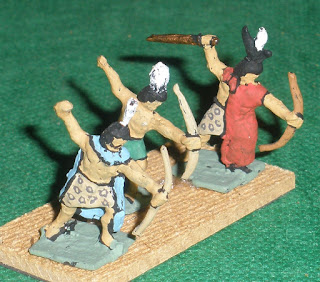 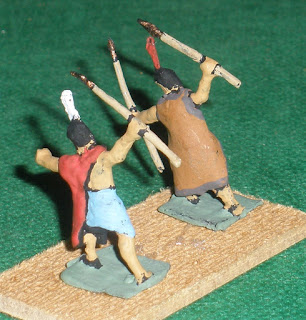 I would say that the Libyans came out better than the Egyptians. Rough and ready, certainly very crude, but I like to think that they have a certain character.

This has now been posted on the Pages menu. 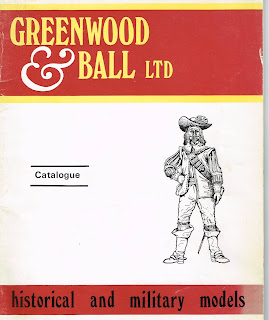 Some early attempts at Egyptian conversions

Back in the days when Garrison were owned by Amazon I tried to get Paul Ashton to bring out the old 20mm Garrison Ancients. He agreed, and further suggested he might also go for some new figures if I could guarantee enough orders. Full of enthusiasm (and with permission) I started producing rough conversions to give him an idea of what I would like. In the event, Paul finished up selling Garrison to me, I made Tiranti moulds of some of the conversions, then those moulds broke up a bit, I never got them professionally sculpted, and finally moved on.

These are some of the Egyptian conversions. Please don't laugh too loud; they get upset easily...

No excuses for the headgear... 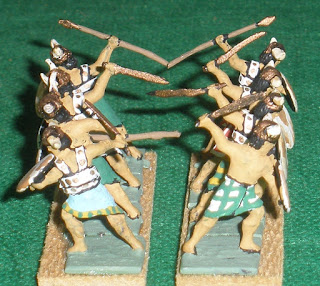 And if the Sherden headgear wasn't enough prove I'm not a sculptor, the Peleset would really give the game away, 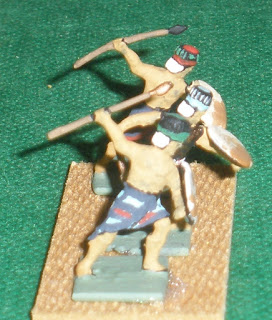 The archers are OK bearing in mind that they are several copies removed for the original masters - I was making basic masters, then using these for the next stage and so on - all dropcast at that time. Eventually, once I owned Garrison myself, I put together a different archer to act as my standard - but these came first. 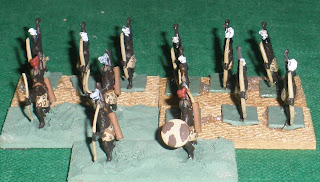 The horse archer also didn't make it into my later production - but in this case I think it was a pity. I would have liked a couple of units of a decent production version of this one. 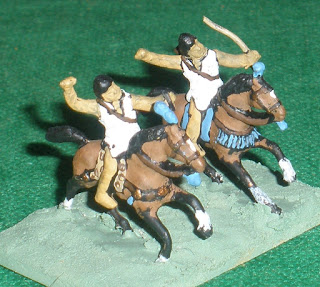 So this post is really a case of 'what-if' - what if Paul had continued with Garrison and arranged some of these to be redone professionally, what if I had?

When I was building my Minifigs Kushite/Blemmye armies I needed a load of cheap spearmen to act as Nobades/subject Kushite spears. The problem was solved when I picked up a couple of hundred Zulus at the bring and buy at a convention. Most of the figures are Minifigs Zulus, not convinced that  a couple aren't by other manufacturers though.

These were always going to be quick dry brush jobs. The first hundred were quickly finished and pressed into service, the rest are still being used in various ways. Might even cast up some Colonial Brits sometime.

There's nothing else to really say about these - the time spent on each figure was minimal and I didn't use any fancy colours. Mainly lots of white. 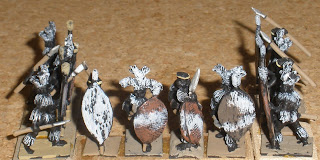 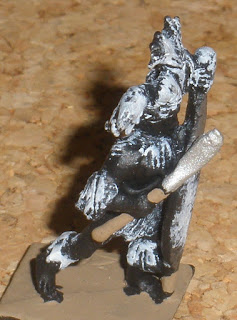 For bright colours I waited until I did some figures for my Hyborian Black Nations army - but even these weren't exactly a major effort time-wise.