Short digression from the Persians, normal service being resumed. 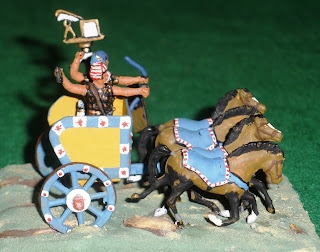 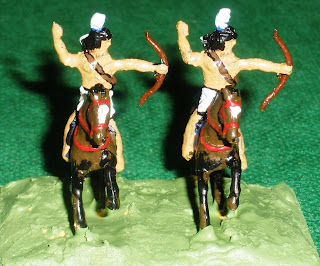 6x4Sp - Greek GC3 on base and with head swap 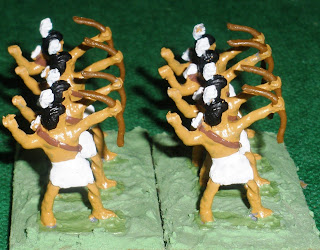 2x2Ps - the spearman is simply the Nubian auxiliary PEA6 with a new left arm and quiver. 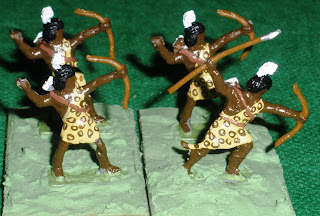 And just to show I'm back on target, GC5 on bases and serving as Late Achaemenid mercenary Greeks 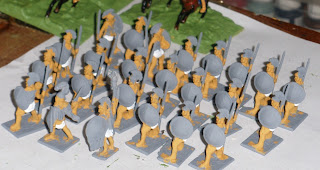 Hoping the spam issue is sorted I'm taking out the moderation requirement - but in future I will automatically delete ANY anonymous post - though to be fair this lot were by someone known to me and wasn't an attempt to fool me - he has used his name in the 200+ emails we have exchanged since November!

General's chariot I already have. It's an old conversion... let's see, Airfix Roman horses, Airfix Ancient Brit body built up with card, wheels from a pencil sharpener, crew 3 converted Garrison Greek archers, including Minifigs standard and Lamming shield... Charioteer originally had a whip but I don't think I'll replace it. 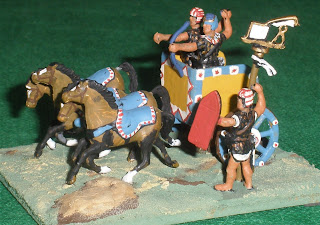 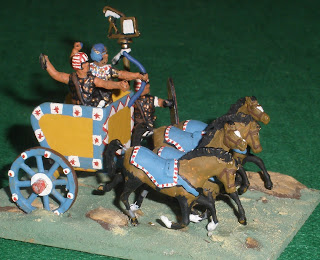 Hide shield pattern has worked better than it did with the Persian levies. The head swap is a bit crude but looks OK at a distance! The figure is based on the Greek medium cavalry figure with feet turned forward and put on a base. The cavalry figure unaltered apart from a base will be used as the Greek component of my late Achaemenid army. Only thing left with this unit is to paint the spear tips.

When setting these out I thought the army has 2 2LH - it only has 1! Base needs to be repainted and I think I'll redo the ostrich plume white.

So most of it already done. I'm doing this army with a green base to match the Persians, etc,  but with 6 elements of 4Sp now done, got the General's chariot and LH, only need a dozen archers to complete it! Should be finished in a couple of days.

Further, it's an unusual and rather pleasing army in that every figure is a conversion.

Over the years I have completed a lot of conversions that never quite made it into 'production mode.' However, these figures are coming into their own as far as the DBA armies go!

The first two elements are just generic light javelin/shield armed peltast/psiloi types - 3Ax and 2Ps. They represent all the javelin/shield subjects such as Cabalees, Moschi,Tibareni, Mares and Colchians. May repaint the shields sometime but not yet. 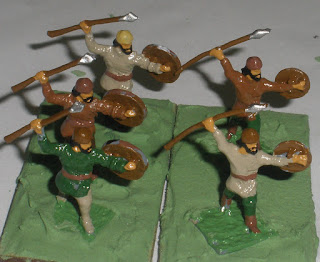 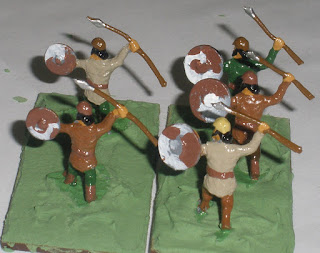 Not really accurate but this lot represent the Ethiopians. In theory, of course, should have spears tipped with gaelle horns, wouldn't have such tidy hairstyles and no ostrich feather headgear.  As I said, not really accurate. 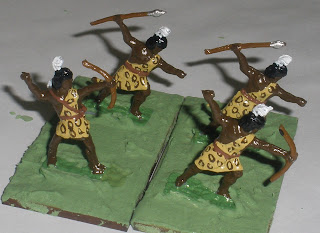 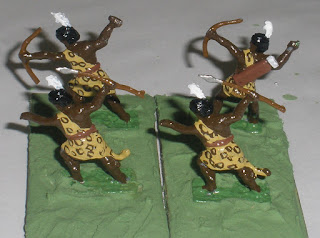 I've now got all 4 spara units completed for the Early Persian Army though the I do intend to do a 'new' Saka unit. I went with red because I liked both the red and blue Immortal elements, will only use 1 of them in this army, and prefer the blue unit.

Of the robed figure conversions I think the Persians are far less successful than the Immortals or Medes. The head coming from a smaller and earlier figure in the PE Range it doesn't quite fit correctly. 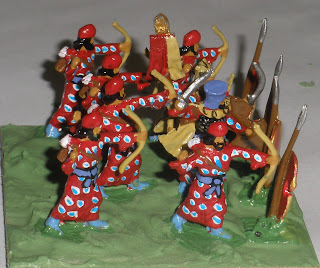 I think I may also need to touch a few figures up, especially the back of the standard. 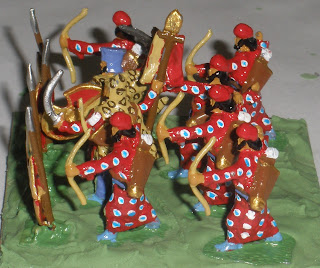 I think the front view tends to show the awkward angle a couple of the heads are at.  Still, they do the job. 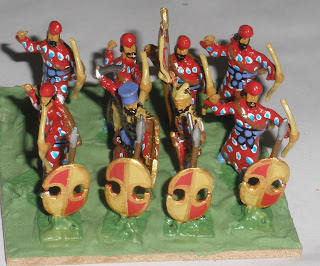 One of my earlier conversions was to sort a Persian infantry figure with a spear and large wicker shield. The figure it was based on was itself an early Garrison figure - smaller than most of the others, not as well sculpted really but also very useful as a basis for conversion work. I haven't really produced as many of this conversion as I had intended but it does make a very useful 'rabble' figure for both Achaemenids and Sassanids. 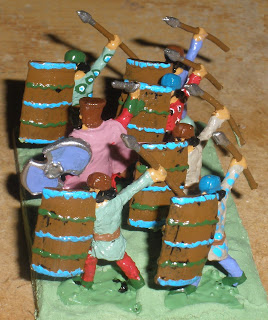 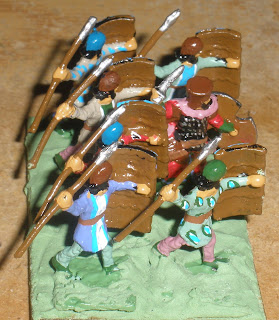 The problem with blogging, then painting a unit, then blogging is time between blogs...

So thought I'd do an update on the current mini project, the Garrison DBA Early Achaemenid army.

This is the present state of affairs, a mix of newly-done, old 'spares' and a couple of 'placeholders.'

The four 4Bw elements will eventually be 'new' Immortals, robed Persian, robed Mede and Saka. At the moment I still don't have enough robed Persian figures so a second element of Immortals is standing in. Likewise, I have yet to paint another Saka/Scythian element so an element from the main army  is on secondment (as is the Saka cavalry element.)

The cavalry are a newly painted unit of Guard cavalry - like the colour scheme so may do a full size unit later - and a light cavalry Saka element. 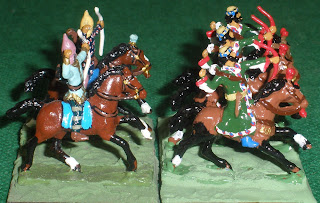 When I paint large infantry units I usually paint a few 'spares.' In this case, Theban hoplites and Persian archers to act as the 4Sp and 3Bw elements. Both original units are still intact and are 48 figure/12 element units.   I hadn't noticed the mark on the front of the rear archer - happily, I have two of these elements spare so can always use the other one! 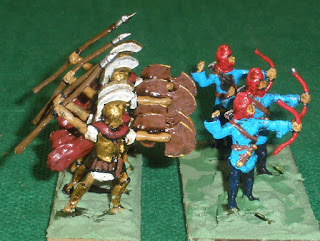 Still working on the other elements for the army and could yet change the ones above anyway. One thing I haven't decided on - do I do another Persian General's chariot? Most of the other Persian/Mede combos have one of their own and I like chariots so...

First of the new Persians

Well, did the first test runs on the new moulds - be a while before I've got them fully sorted. I'm also continuing with the 8Bw elements of Immortals and have completed another one.

This is the current state of play, 3 Immortal 8Bw elements and 1 Mede 8Bw element.

I like the colour scheme on the new Immortal element - could be convinced to use it for a full sized unit. On the other hand, it's another 'blue' unit. 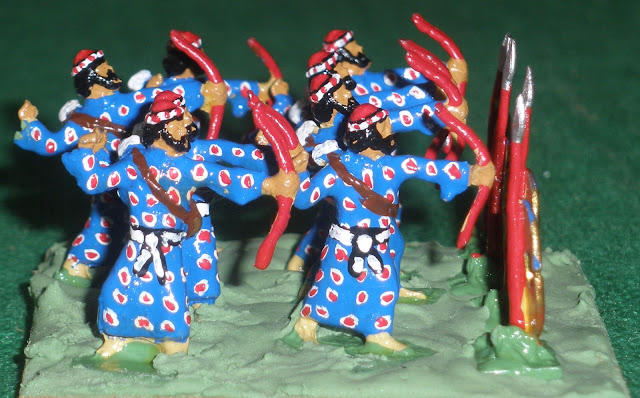 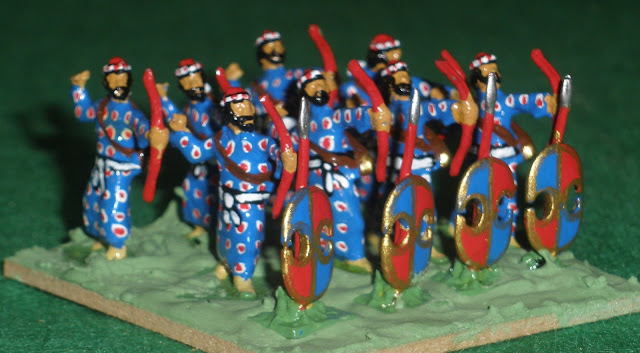 Only managed to produce 6 useable Medes on the test run so added an officer and standard bearer. The figures themselves are not quite as good as the Immortal figure - the hat and hair simply being from the officer figure is not as convincing as I would like. It's a green unit, which I'm short of, so does suffer a bit from 'green overload' with the base. 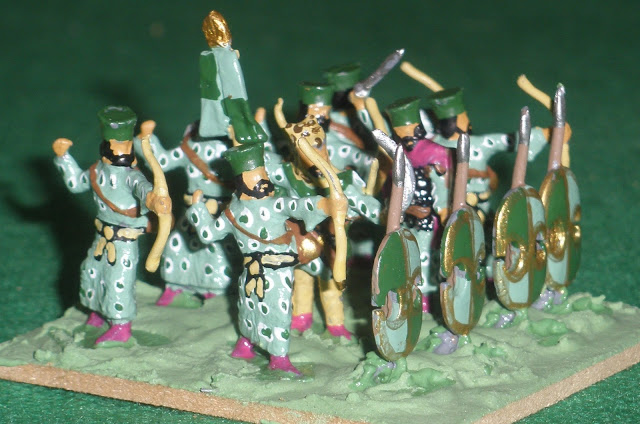 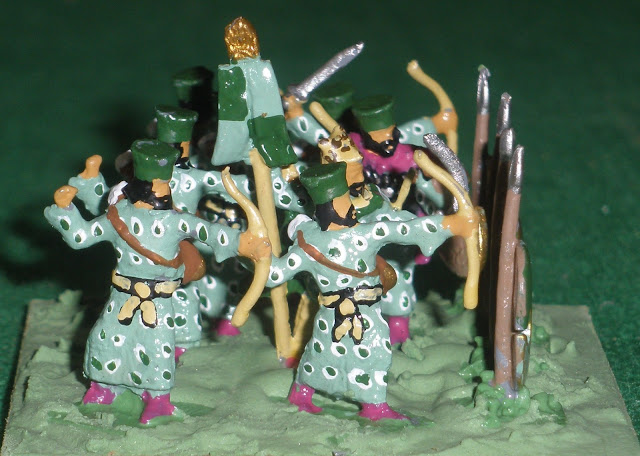 So overall a reasonable start, need to get a few more of the robed Persian archers for the next element.
Posted by Rob Young at 18:05 19 comments:

I tried putting the body of the Achaemenid Guard cavalry figure on a number of robed bodies - Immortal, Assyrian bow/spear/shield - and had a mould made. This was quite a while ago - just checked November 2014 -  and I finally got round to starting to paint them. Then stopped.

OK, perhaps some kind of burn out, so new tack. I'm painting them up as separate elements now in different colours. First two (red and brown robes) completed and look pretty good.

Meanwhile, I also produced a few other figures and I recently sent them away to be put into moulds. The estimated time of delivery of the moulds was to be about 23rd April, haven't got them back yet...

When I do, current intention is to make up a DBA army or 3.  4 8Bw elements per DBA army will be needed so for each I will do 1 of robed Mede archers, 1 of robed Persian archers and 1 of my Scythian conversions.

Meanwhile, some other elements have been started, including an element of Blues...

I'll probably be using the spear armed 'new' figures for earlier Mede/Persian armies in the same way as I did for my Minifigs Mede army.
Posted by Rob Young at 16:58 4 comments:

Another Persian general plus cavalry

The cavalry are the last completed unit of the currently stalled Garrison Persian units - 3 units of cavalry and 1 of Immortals seem to be 'stuck'. The chariot was put together as a one-off unsticking tool...

Garrison 25mm Persian chariot, 20mm Roman horses, converted Phrygian axeman as charioteer and cavalry general as general. Worked out OK - not happy about the crew, not very impressive. I think I chose the wrong figures. Also, they are tending to flop towards each other. Chariot itself works though. Think I should probably have painted an emblem on the side - could add one later. Perhaps I should also think of decorations for the general's cloak? 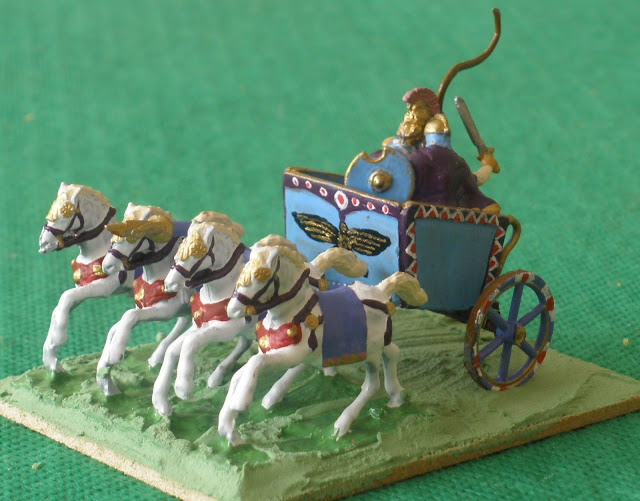 The fact that chariot and cavalry are all blue is probably just coincidence.
Posted by Rob Young at 09:41 2 comments: