Evaluation of the game? System worked well, I'm pleased with and incorporating the Unit Commander score board was an undoubted success.

An update... the cargo ship is by SGTS' MESS.

Cadet Commander, getting on quite well with this.


Meanwhile, Great Tickling Contest I'm looking at a few different toys to provide the teams. There are some finger puppets on order fro ebay but meanwhile a couple of wind up toy teams.

Creatures from the pit...

Our cottage was across the the road from the Hospital sewage plant and frogs bred there in great numbers... so every year there would be a wet day when they all left and (swarmed?) across the road towards our house. As in... thousands of the things, about 1/8th" froglets. Perhaps not really scary as monsters, but make them bigger!

So originally I was going to use frogs for this little scenario but a visit to Langley's in Norwich came up with something else (and at 4 for a pound!)


So, need to reassess things a bit. Could have just pulled back to the start line, lowered the combat factors for the 'hordes' to 1 instead of  2, perhaps tried a couple of other things (perhaps reduce the number of visitors for  start) - but temperature in shed past 90 so decided to just wrap it up. The scenario is still there for the future.
Posted by Rob Young at 16:01 2 comments:

Having spent a few posts on other aspects of Partizan, thought it might be an idea to post what we actually bought. By 'we', of course, I mostly mean Sandra...


The second game from Partizan/Cranwell. Actually this one might be more useful in lots of ways - I can see me using for the war of  1897. Also now updated on pages.


GAME OUTLINE
Each figure controls a group of warriors and their leader. At the edge of the board in the centre nearest the player is their band’s flag. The winner is the first player to score 10 victory points OR capture the other player’s flag.

THE PLAY SCOREBOARD
Your play board is used to tell the different fighting skills and strengths of your figures, and to keep track of points that you win and the strength that any of your figure lose.
THE PLAY AREA
The play area is 2’ x 2’ and is marked out in hexagons. Each hexagon represents one movement action.

No more than two figures may be in any one hexagon at the end of a figure’s activation phase. If there are more than two figures, the last figure to enter the pace has to move back to the space it came from. This is a free move and does not require an action. If this is not possible it must move into any other allowable space (ie with no enemy and no more than one other figure). If this is not possible it leaves the game and goes home to mum in a sulk (but does not lose any of its strength). In this case the other player does not get any additional Victory Points.

GAME SET UP
Place the teams’ flags in or near the centre of each baseline. Each player lines his figures up in one of the baseline spaces (up to 2 in each space).

THE TURN
During each turn a player may try to activate any or all of their figures to make them carry out actions.

The first figure to be activated is your leader, who is activated automatically. You may then choose one other figure to get an automatic activation next.

After this, dice for each figure you wish to activate. To do this, throw a D6 – anything other than a one allows you to activate one figure. If you throw a 1 your turn is over (sorry….).

During an activation, a figure can carry out up to two actions:

Move – up to 1 hexagon in any direction.
Have a punch up
Rest – to get its strength back (counts as two actions)

MOVEMENT
Each model may move up to one hexagon in any direction in each action (so can move a maximum of two hexagons using both of its actions if it wishes).

If a figure crosses a wall or fence, wades through a river or spends any of its action in a woods, its uses one of its actions.

A figure can be in or pass through a hexagon containing one of its own friendly figures but no more than two figures are allowed in any hexagon at the end of its activation.

If a figure enters a hexagon with as enemy figure it must stop and have a punch up with him. If there are two enemy figures in the space the moving player may choose which is involved in the punch up.

Each attacking figure rolls a number of dice equal to its ATK value. For most figures this is 2, for your leader or any heroes it is 3. Choose one of the dice to see what happens to your enemy:

*If a figure cannot move towards his flag because the hexagon(s) is already occupied by two figures, or if he is forced back into a river hexagon he moves into any other hexagon the he can and loses one from his STR.

*If a figure has to move 1 hexagon away from you and this causes him to go off the board, he goes home to mum and is removed from play.

*If a figure has to move away, the attacking figure can follow up and stay in contact if he wishes (providing this does not mean that here are more than 2 figures in the same hexagon).

Punch ups across walls or hedges.
If you attack a figure who is behind a wall or hedge or other sport of protection, your attacking figure only rolls one less die, not the usual number indicated by his ATK value.

REST
If your figure takes a rest action it can get some of its strength (STR) back. A  figure can never have more strength that it started with. A rest counts as two actions so the figure cannot carry out any other activity this turn.

SCORING POINTS
Each time one of your attackers causes an enemy to lose STR points, you score a Victory point. Mark these on your score board.

There may also be other ways of scoring victory points during some of the specific game scenarios.

WINNING THE GAME
The winner is the first player to reach 10 Victory points OR to capture the other player’s flag.

What you will need:

And.. to be ready to have fun. 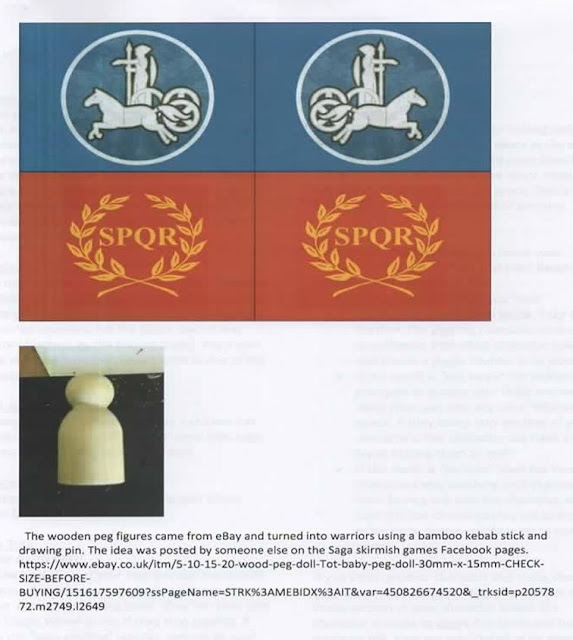