Actually, my real job during the Whit holiday....

Was acquiring and setting this lot up...

On And Off Duty by Captain J.Percy Groves

I nearly didn't buy this. Lousy condition, falling apart. But it was set on ebay with a low starting price so, why not put in a bid... so got it dirt cheap.

Frankly, it is in lousy condition. Virtually unbound, couple of the plates damaged. But, it was cheap and it had some useful colour prints of uniforms. 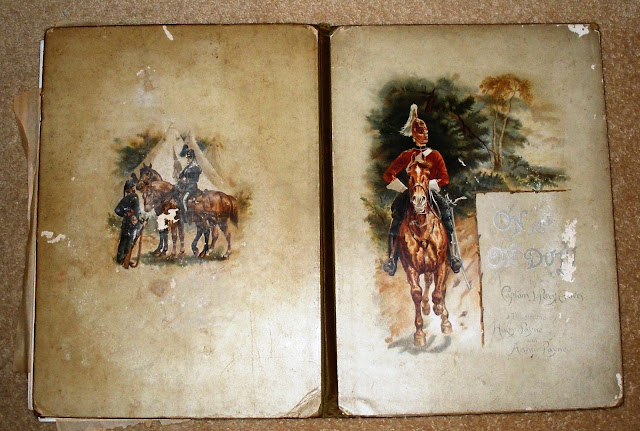 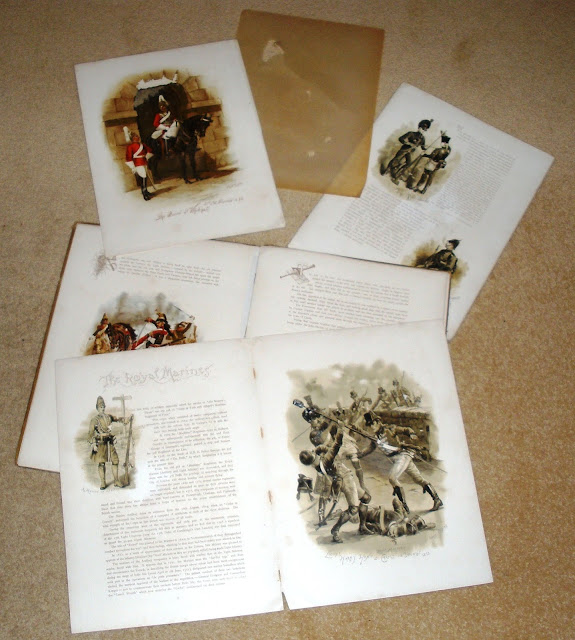 Then after it arrived I noticed the name of the Illustrator. It sounded familiar so I checked... yes, Harry Payne, Greenwood and Ball sold a set of postcards of Harry Payne prints back in the 70s. I had a set.

So, really what can only be considered to be a good buy.

Especially when you consider that one of the loose plates was smaller than the others... a plate in near perfect condition from a different book showing a 1904 Hussar... 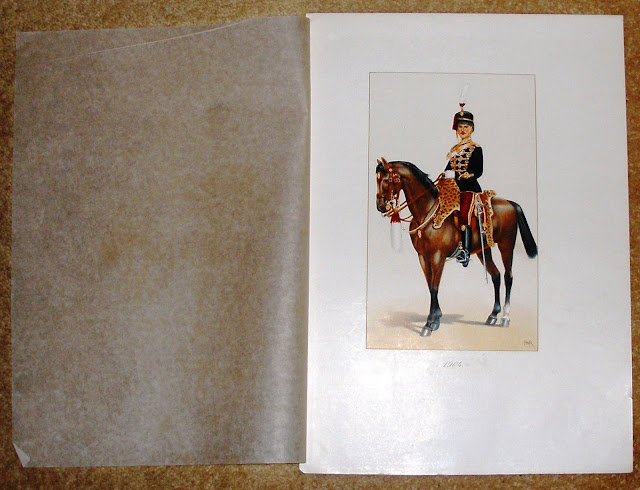 Based on this figure from: 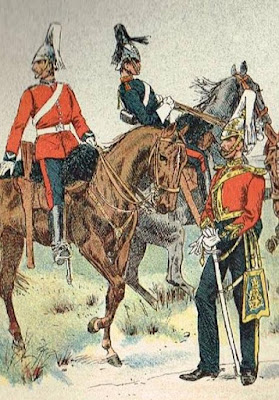 This photo shows how useful enlarged photos are - the black needs retouching on a couple of figures, hadn't noticed on the model itself. 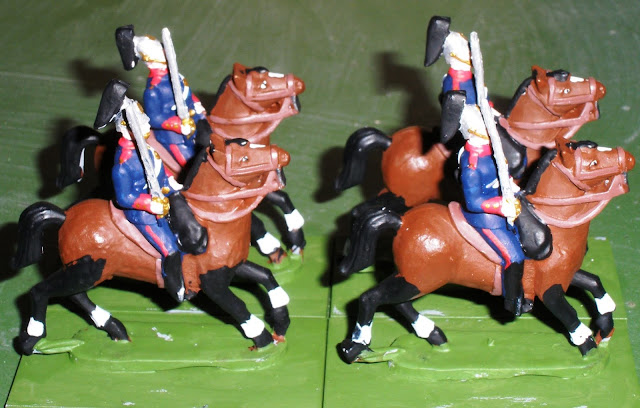 The blue uniform with red facings is, I admit, a favourite colour scheme of mine. Which is why I like the artillery figures I suppose... 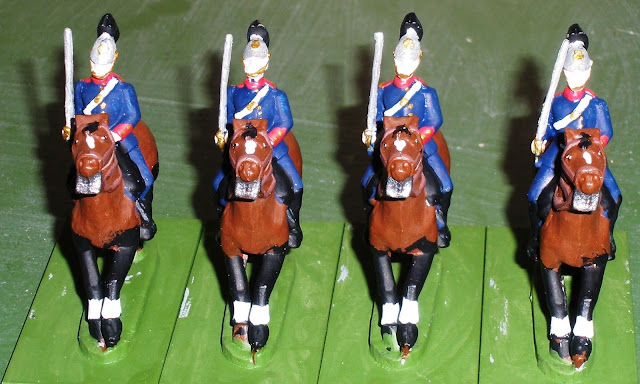 The figure this is based on is wearing gauntlets so I've guessed at the cuffs - although an actual guess would have  involved a bit more gold. Plain cuffs are easier. 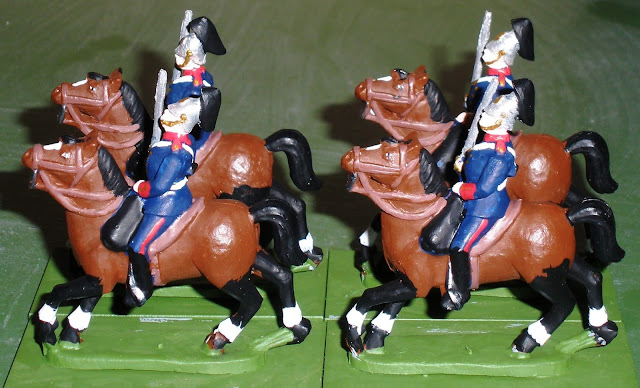 I've got a sort of convention with these figures. Light Horse and mounted infantry carry a carbine and use them, 'heavier' dragoons carry a sword and charge. In fact the British army of the time didn't have any mounted infantry - however, in time of war mounted infantry were supposed to be raised and horses were kept at various places to provide mounts.

A number of things recently have involved using the above reference so I thought that, rather than the piecemeal use of these, it might be an idea to just post all of the pictures I have on 'Pages'. The original work was published in 4 Divisions - I have three of them. 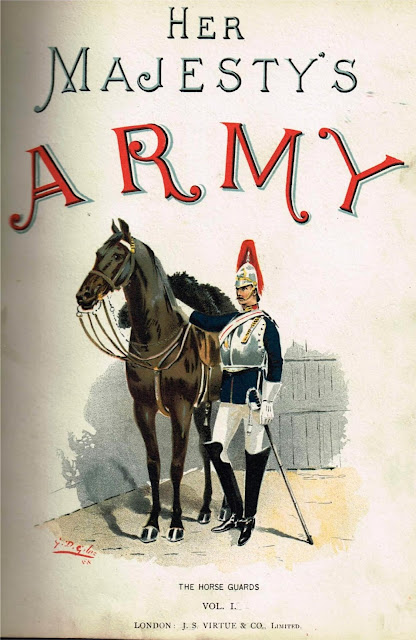 I think that I'll probably add a few more items to Pages in the near future as well.

As part of the discussion with Ross, this is the picture from 'Her Majesty's Army' of a soldier of the 1st Volunteer Battalion, Rifle Brigade, 7th Middlesex Regiment wearing Hodden Grey. 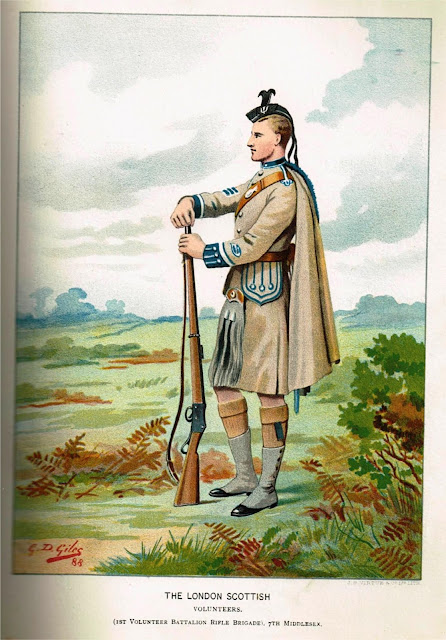 The various volunteer units seem to have had a certain amount of leeway in their uniforms. In some cases they adopted grey rather than red or khaki. Having said that, originally khaki seems to have been very loosely defined - anything from a sort of ash colour to a stained by tea or coffee look. So the grey uniform may actually have originally been a local version of khaki.

So far all of the Regiments that I've come across in grey uniforms have been either from Middlesex or Scotland - for Scotland, look up the modern tome 'Vanished Armies' (2009) for pictures of the Cameronians. Middle top row of the front cover is 5th Bn Cameronians for example. For Middlesex see below.

Some points about the uniforms. Firstly, blanket should be the same colour as the rest, but with the same colour for helmet, tunic, trousers and gaiters I thought I needed to add a slight contrast with the blanket. Secondly, uniforms at this time didn't all have brass buttons and fittings - I just like them so standardised on that. However, real grey uniforms seem to go with steel/silver or whatever - and brass wouldn't have seemed right anyway. Rifle slings appear to be brown rather than white. Finally, just had to go for the black facings... 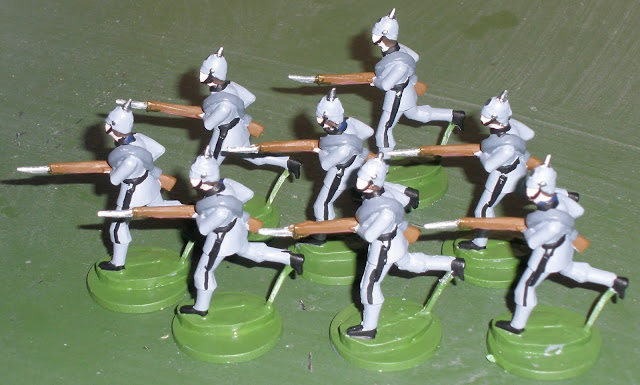 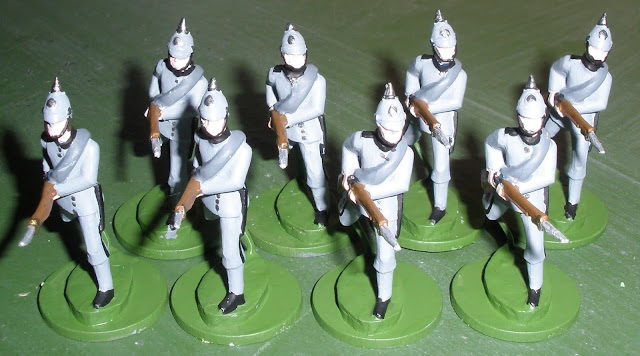 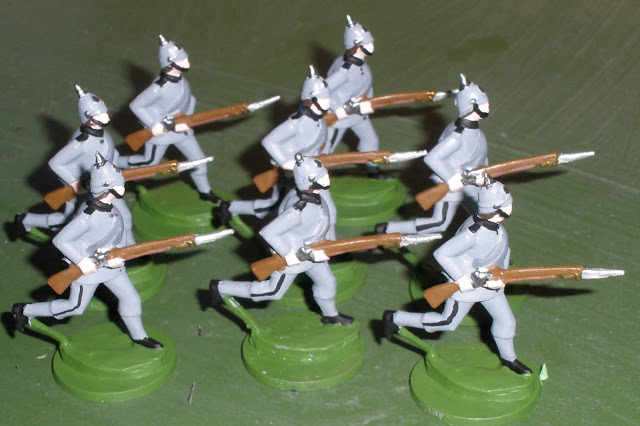 1897 The General and the Machine Gun

I seem to be at one of those times where I'm finishing lots off whilst having time to photograph and write about it... won't last...

Both these have been sitting on my painting desk and staring at me for quite a while now. Finishing them has been long overdue - the machine gun itself was finished in February!

After several slight distractions it's time to remember that my major project for the year is the 1897 Great War in England.

So, continuing this is a unit of mounted infantry. Trying to think of something else to say about this, but really that says it all. It's a unit of Volunteer or Militia Mounted Infantry. As yet unvarnished as my varnish has run out. Oh, one thing - painted eyes on the horses. No reason except that the Irregular figures had the horses eyes painted. Actually, it does look a bit better, perhaps I'll review the other cavalry figures at some time. 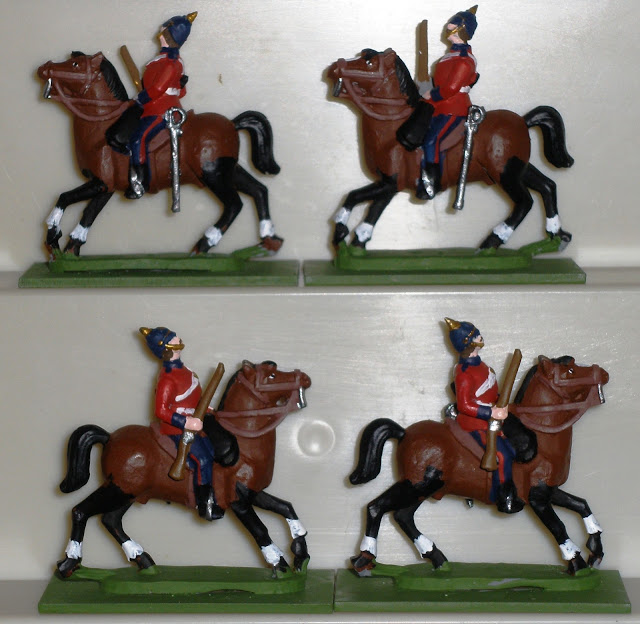 Should have posted this with the cavalry but didn't think about it. Later version of Romans, different ebay purchase, haven't done anything with them yet - will just be rebased. The seller had 2 lots for sale and I'm beginning to regret not buying the others as well - naturally...

A while ago I picked up 10 reasonable early Minifigs Roman cavalry. Main problem with them is the fact that they were mounted on plastic horses, although one had also lost his spear. However, as they would be based in 3s that doesn't really matter - it was always going to be 3 bases anyway. Meanwhile, simple task to paint up 9 Garrison horses to remount the decent ones.

Well, you have to sometimes, don't you. 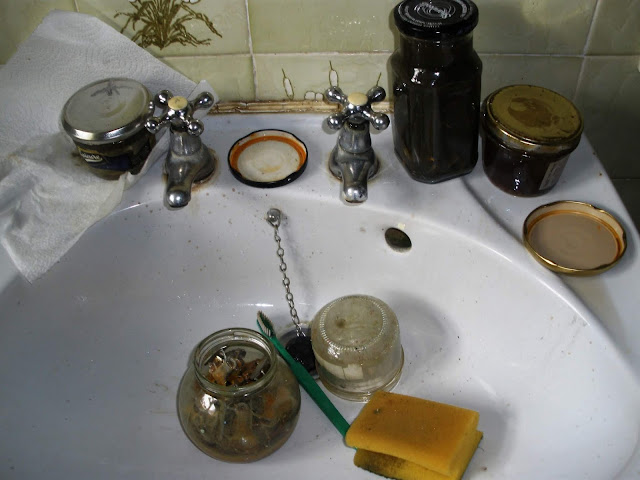 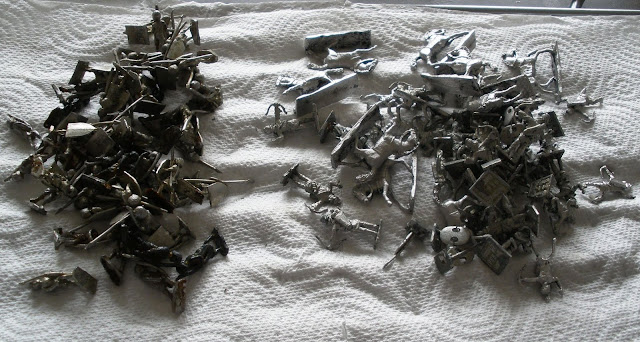 Quick paint jobs so soon finished - though not varnished yet.

The other thing needed to go with them is a transport system, so sort of sorted that as well...

Saturday was quite a productive day. Apart from the 6mm SciFi figures I also managed to complete the British artillery battery. Having said that, the gloss finish hasn't worked properly so I'll have a bit of retouching and respraying to do.

Garrison had quite a nice (if now old fashioned) range of sf tanks. The first lot I painted up were loosely based on German WW2 schemes, recently I started painting up more of these but in a more British scheme. Then I spotted a load of 15mm Stargrunt 'spider drones' on the Ground Zero stand at Salute and thought they would make good 6mm alien machines. The idea is that they are fast-moving lightly armoured swarms that like to swamp their enemies - a bit like fast zombies in zombie games.

The result is a very quickly painted set of sf models... more spider drones on order, human infantry there's a load of Brigade Models infantry on order, still thinking about a source for suitable alien infantry.


(While typing this the post arrived bringing with it the next two swarms...)

A minor scene of chaos?

I'm not very tidy and I don't always put things away. Likewise, I rarely find myself working on one thing at a time. I have recently taken over the sofa area of a spare room for photographs and the odd minor battle but it also seems to be a temporary storage area as well, anyway, walked into the room, looked at the area and thought...

The ever growing power of Atlantis

Back in February I mentioned some reinforcements for the Atlantian army. Since then I've added to the spears part of the army but I'm definitely lagging as regards the pikes. I've also managed to acquire more cavalry. Of course the elephants are not an issue - I can always cast as many as I want, plus I've built up a healthy surplus of old Minifigs archers to use as crews. I think the best way of describing the Atlantians is that it's a 'background' army - mostly using bought painted with minimal retouching, not a major effort, just quietly building up.

The thing is, non of this has really been intentional - it's just a case of 'they're cheap, could use them for Atlantis' - with rarely a thought as to when I'll get round to actually be able to repaint/retouch/base/etc them - or even if they'll ever be used as anything other than the original DBA/HoTT army.

Someday I'm going to have to stop this mad impulse to collect large armies- but probably not for a while yet.