Some time ago I mentioned buying loads of cheap Chinese toy soldiers, mainly (?) for job related purposes. Having all this lot around gave me the main idea of using 42mm as the scale for the 1897 figures but also means that I have a lot of 'modern' 42mm toys lying around.

I'm a natural born converter. There was no way that, eventually, I wouldn't just have a go and see if cheap conversions would do. So thought - I'll do one figure.

Mostly, it works. The rifle is a good substitute for a carbine, but add a card bayonet to it and it would still be acceptable as a rifle. The problem is the helmet - with the best will in the world it doesn't look right and would need work doing. 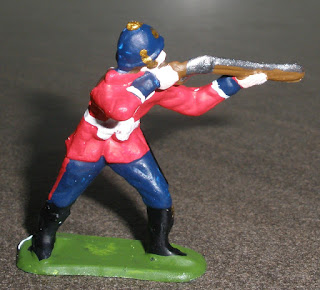 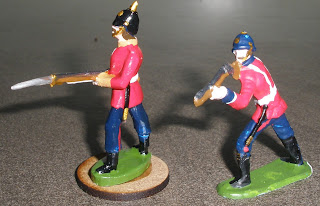 So tried painting helmet white as the overseas version - still not right. 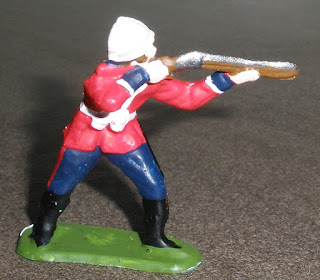 So overall... easy toy conversion (from start to finish, including conversion and under coat as well as both helmet versions were done on the same day) if you're really strapped for cash but the 'wrong' helmet would take quite a bit of getting used to unless you put a lot of work into it. Frankly, not worth it and the only pre-20thC helmet I would be happy using it as is some kind of Renaissance morion...

Email ThisBlogThis!Share to TwitterShare to FacebookShare to Pinterest
Labels: 1897, Great War in England