I've never bothered much with air support in my WW2 battles in the past but seem to have been acquiring a number of  aircraft recently starting with the balsa pulp planes. So it seems reasonable to make a conscious effort to look out for cheapish planes and build up my air forces... so when a couple of nice looking Hurricanes came up, seemed reasonable to put a bid in.

For the last week there's been the start of a draught post for my latest DBA game... which  is set up but hasn't happened yet. Mainly because the wargames shed is currently showing a temperature of 96 degrees and hasn't dropped below 90 in that time...

But I'm still doing other things - mainly painting 'orphan' units again. This time it's getting a unit of Companion EHC sorted.


Adding a shed temperature update - 104... but then, our outside thermometer is reading 110!

RAFM MU Expedition to the Antarctic

Quietly working through various RAFM figures - these were bought in two lots, one several years ago when I simply bought one of each set of RAFM Cthulhu Classics (but missed the big boxed sets) then another a couple of years ago as I started building up Newhaven. One sled just didn't seem to be enough if I wanted to do an expedition!

For the next battle I went for a Saitic/Kushte shoot out, with the Kushites including 2 native Egyptian elements. In other words it was DBA army 1/53 versus army 1/46! Again some of the photos weren't very good due to the lighting situation.

So end of Move 4 the Saitic right and left flanks had both been destroyed plus they reached that 4 elements lost/battle lost moment. Swapping the Bows and Light Archers round proved a bad choice.
Again, a shortish but fun game where I thought I'd try a couple of things that didn't quite come off.

The random palm trees again did their job well as Move Markers - it's proving to be a a simple but effective way of visually keeping me straight for sorting the photos!

Firstly, apologies for the quality of the pictures - one side of the table faced full length windows and it was a sunny day; looks like some out of focus but it's just strong shadows!

Rules basically DBA. Being a solo effort I didn't see the need for alternative moves or PIP dice. With combat, I diced to see which side to start each set of combats from - important for push backs and overlaps. All archers (including Ps and LH) were given a 2" range rather than just Bw. Sp count 2 ranks against all opponents. Battlefield no terrain, just set up and advance to contact.

So first battle, Saitic win. I'll often continue beyond this point but couldn't see the Assyrians turning things around - their left flank was doing OK, but those Ax in the centre were about to be swamped and the second rank of Egyptian Sp would be able to turn and face the outflanking Assyrian cavalry. If the Assyrian chariot had rolled the 4 instead of a 1 things could have been a bit different.

Simple battle, nothing complicated, enjoyed it.

Haven't played a DBA game in ages and feeling withdrawal symptoms, so got down to getting the figures out. So, decided on a couple of games. Normally I tend to use Minifigs for Egyptian and Assyrian armies, for these I decided to give the others a chance.

Rather than putting this lot in  with the battle descriptions I thought I 'd just put the army descriptions in a separate post with links to the armies/figures from previous posts.

So sorted out my (mainly) Lamming Neo-Assyrians - basically the ones that appear at the top of my blog - plus my Garrison Saitic Egyptians and Kushites. However, I also used the tin plate chariot as the general. Likewise, the army itself dates back to the 70s - pre-DBA, pre-Hordes. So for them I used some of the S Range javelin men that I put on Hordes bases.

One that was completely off the shelf with no need for substitutions.   One nice thing about this army - from my point of view anyway - is that every figure is one of my conversions.

Another army of conversions (mostly) - though in this case I still haven't sorted the Cv element out yet (?) and had to use one from my Minifigs Kushite army...

Following all those Japanese aircraft models Tim Gow showcased on his Megablitz site. I succumbed to temptation and sought out a Dinah on EBay. The Dinah was always one of my favourite aircraft back in my early youth when I did make Airfix aircraft as well as tanks - my memory of my own model, painted in a white scheme, is still quite vivid...

It's one thing spending loads on a few figures and then ages painting them up - but if you want large panic stricken crowds running away from/getting trampled by monsters it doesn't work as well. You need a cheap and cheerful rent-a-mob for that.

So had a trawl through eBay for cheap architectural models. Slimline, not at all like chunky wargames figures, they are not only cheap, you can get them cheap and ready-painted...

One reason for looking at the 1/75th figures was because I came across another site, Langley Miniature Models, - expensive but, used in conjunction with bulk cheap figures, might be of interest. It's a massive range - you can get them unpainted as well. If I was really, really... really rich I would seriously consider building up a circus or fairground using their figures. As it is, I have acquired some Lledo circus pieces - looking now at a bit of scratch building a few items to go with them.

Christmas and Birthday presents can be a nightmare for me - I want something, I usually get it before those times anyway. So I tend to think 'What will I probably want in future' - well, the Early War Miniatures A1E1 Independent and Vickers Medium seemed to fit the bill - an expensive want, probably wouldn't buy myself, suitable for a present. That was 3-4 years ago, the Independent is now finished as an adjunct to Newhaven.

One thing I seem to have done is glue the gun mantlet on the main gun on the outside of the turret - seems like it should be on the inside. One the other hand, the War Thunder Wiki site pictures have got the gun upside down, so  I'll not worry too much about my mistake! I'll just call it a production upgrade. 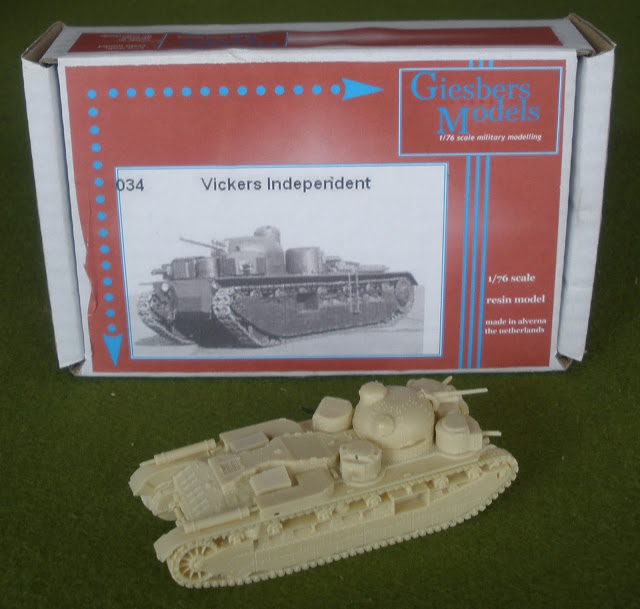 Back to out patients today. seem to be getting there - steroids now down to 4 tablets a day, most things OK, blood pH a bit low as are potassium levels.

There are 2 things wrong with me - and the potential killer was barely mentioned... it's down as having a minor effect on my issues, the one of concern being the one that has a 90% remission rate though has a 50% chance of coming back - at which point it's treatable...

This is a bit better than a 25-73% chance of surviving the next ten years depending on how aggressive it is!

So, generally speaking, still a way to go but a good day all round.

Next out patients visit in 2 months.

I've now painted the other two armoured cars - an Austin  and Austin-Putilov(?). Possibly...

I did finally decide to varnish then, including the Rolls Royce - they look much in a clear varnish instead of a mat finish and will fit in better with my other figures. I 've also made an attempt to tone down some of the black on the tyres with grey - not as successful!