Every Seleucid army army in the 70s had them - Syrian archers in large numbers. At different times they would be MI (Medium Infantry) , LMI (Light Medium Infantry), LI (Light Infantry) or Hordes.

So naturally I had a load. Since then I seem to have acquired a few more here and there...

So starting to put them together - relatively smallish units of LI, LMI and Hordes , but still got more to base.

These are my own 70s 'originals'. I picked them up quite late - my first levies were a load of long-gone 'S' Range Medes. As such they are not the first production models  - see the more delicate bows and dagger on the belt. Not sure, but don't remember if I've every repainted them, think this is the original scheme. The ones I've picked up  since seem to be mostly the first production figures - thicker, cruder bows. I've so far mounted six bases each of LI and LMI. They represent figures bought from two different sources - some have darker brown bows and more decorated bowcases, but they mix well together. 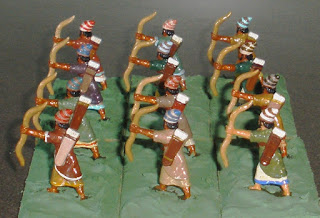 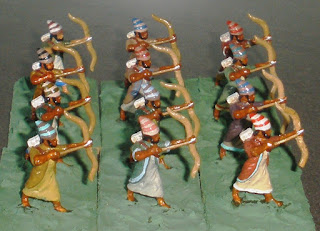 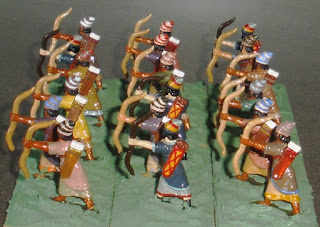 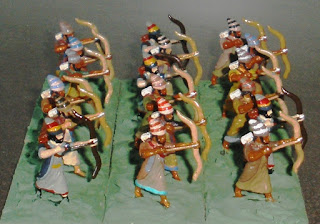 At the moment I'm not sure which set to build up with my remaining figures - I could make the LMI contingent up to 48 strong, that would probably be the best option, but both LI and MI are 'good' options as well.
Posted by Rob Young at 17:38