The Philistines are one army I've long wanted. Over the years I've acquired enough infantry and cavalry to put one together, what I've always been short of are the ox carts - somehow, these seem to be an essential component for any Sea People or Philistine force I put together. At the moment I have 2 ox carts in Dettol, though only 4 oxen, as well as most of the infantry force,  but finally decided it was time paint up the 'conventional' chariot force.

I didn't really feel that I needed many and settled for 1 chariot for the general plus 2 others. The intention was to find chariots that looked as though they were based on Egyptian models but with a distinctive 'Philistine' look. 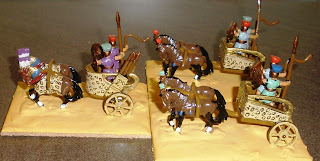 I had a few Pharaoh's chariot horses plus a late 'S' Range Egyptian 'Heavy' chariot. These looked perfect for the job of providing the General with transportation. Rather than Egyptian style artwork I've gone for a 'leopard' look 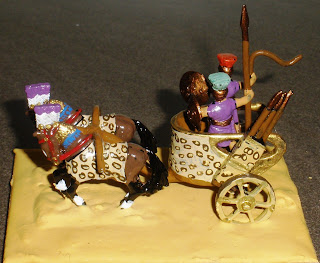 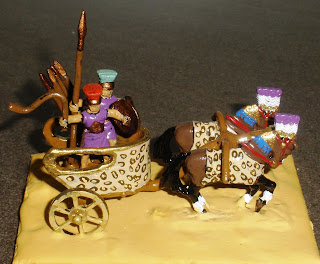 For the 'line' chariots I also wanted an Egyptian look without using Egyptian chariots. Stuck amongst a job lot of chariots I just bought were some that seem to be old Minifigs Bactrian chariots. However, they did have a sort of 'Egyptiany' look about them, so...