Still waiting for those birthday orders to arrive so started to look around for things to do...

Many years ago I bought a load of Zulus at a Bring and Buy to act as Nobades or Subject Kushite spearman for use in DBM Bk2 army 55.

OK, for a Black Nations HoTT army I could have simply used my current Kushite hordes... plenty of Warband lying around... but I wanted something more colourful. Cavalry, colourful enough, warband, not.

So I've painted up some of the Zulus instead.

Really, should probably have stuck with white and blue for the plumes and clothing, just couldn't resist the red. 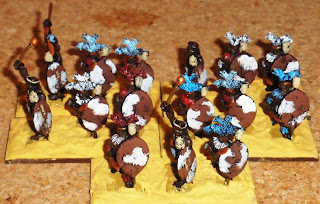 The army would be easy to expand - got plenty of Kushite cavalry and Zulus left, plus could take it out of the Hyborian range with a couple of elephants, or perhaps some of the RAFM Um Cijo figures. However, I think that's unlikely - this particular build was more opportunism to use figures already lying around and to give a potential opponent for Stygia rather than anything else.